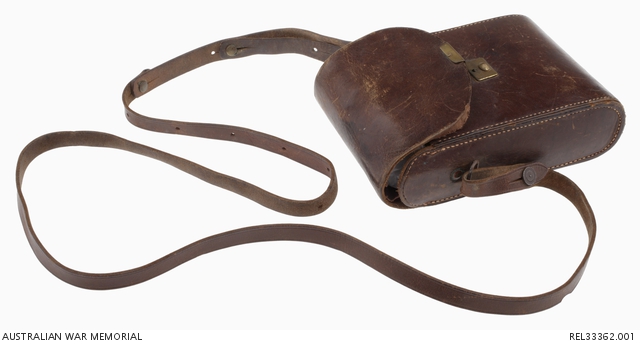 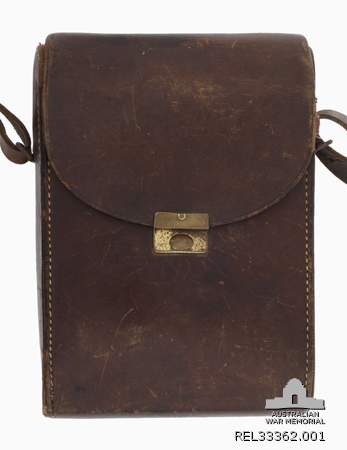 The leather case is impressed 'CARL ZEISS / JENA / MADE IN GERMANY'. It is fitted with a brass coated slide-clasp for the closing flap. The interior is lined with brown pebbled buckram and the inside of the flap is marked in pen: 'Personal property of / SGT PALMER AJC / 408504 / RAAF / GIVEN TO F/LT RN DALKIN'. The buckram has come away from the leather over the whole of the flap. Dalkin has also marked the reverse of the case in ink with his name and rank. The case is fitted with a two-piece leather carrying strap which is joined to the case by a pair of brown painted wire brackets rivetted to the case. The strap is joined together by three brass posts attached to the leather via a slot-and-eye arrangement.

Associated with the service of 408504 Sergeant Arthur James Charles Palmer and 260612 Flight Lieutenant Robert Nixon Dalkin. Palmer was born in London in 1917 and immigrated to Australia with his family soon after. He served with the 3rd Divisional Signals (militia) from 1936 to 1938 before applying to join the Royal Australian Air Force in 1940. However he was not accepted for flight training until April 1941 as he had not studied trigonometry at school and was required to attend night classes to satisfy this requirement. Initially Palmer trained on Tiger Moths and Avro Ansons before being posted to 7 Squadron, Laverton where he undertook conversion training to become a second pilot for the Lockheed Hudson bomber. On 14 March 1942 he was posted to 13 Squadron RAAF, then based in Darwin, and allocated to Flight Lieutenant Robert Nixon Dalkin's Hudson crew. He completed 32 Hudson operations, many of them around Koepang and Dili, Timor. It is not known precisely when Sergeant Palmer passed on his binoculars to Flight Lieutenant Dalkin but as the former was posted south to Victoria in August 1942 to do a conversion course to Hudson pilot it is assumed to have been done before then. He was commissioned as a pilot officer on 1 October, promoted to flying officer on 1 April 1943 and flight lieutenant on 1 October 1944. Palmer underwent further training as a flying instructor on Tiger Moths and finished the war as an instructor at Benalla, Victoria. He was discharged on 29 October 1945. Dalkin was born in England on 21 February 1914 and immigrated to Australia in 1929. After two unsuccessful attempts to join the Royal Australian Air Force in the early 1930s he was accepted as a cadet in December 1939. Obtaining his commission as a pilot officer on 4 May 1940 Dalkin was posted to flying training duties at several units before completing a Navigation and Reconnaissance course at Point Cook in Victoria. He was then posted to 2 Squadron at Laverton, Victoria where he undertook conversion training to become a pilot, capable of flying the Lockheed Hudson bomber. In 14 months he completed over 50 anti submarine and convoy escort sorties. On 14 March 1942 Dalkin was posted to Darwin as flight commander of 'B' Flight, 13 Squadron with the rank of flight lieutenant. He immediately commenced operational flying in Hudsons against the Japanese. During most of these operations his crew consisted of: Sergeant Arthur James Charles Palmer, Sergeant Roydon William Richard Lugg and Sergeant Clifford Douglas Fisher. On 8 July Dalkin was awarded the Distinguished Flying Cross for 'displaying outstanding courage and determination' in the course of his many operational flights. 13 Squadron was also awarded the United States Presidential Unit Citation for outstanding performance of duty in action from 13 April to 25 August 1942. Dalkin remained with 13 Squadron throughout 1942 also serving as Operations Officer, Head Quarters North Western Area until posted south as an instructor at 1 Operational Training Unit in 1943, and later Chief Instructor at Bairnsdale Victoria. In October 1944 he was posted to liaison duties in England with Royal Air Force Bomber Command. There he flew operations to assess RAF techniques that could be developed for use by the RAAF in the Pacific. Dalkin returned to Australia at the end of the war.