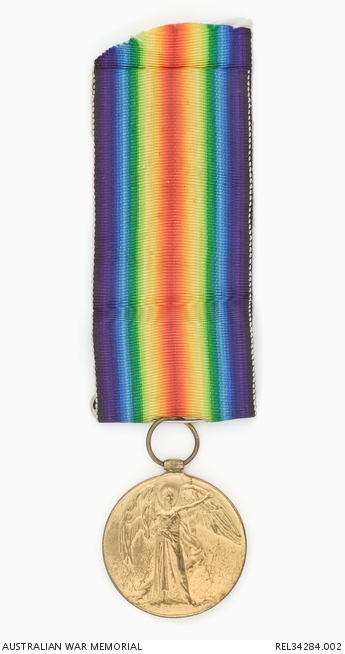 This medal was received by Temporary Corporal (T/Cpl) 2834 William Pillans Marr of Cessnock, New South Wales. Marr enlisted as a private on 12 October 1916 at the age of 26. A weighman by trade, Marr was assigned to 36 Battalion and left Sydney aboard HMAT Beltana on 25 November 1916 for service on the Western Front. Marr sustained a gun shot wound to his right leg on 26 July 1917 and was admitted to hospital in Belgium before being transferred to England. He embarked from Southampton on 20 March 1918 for a return to duty in France. Marr was again wounded, on ANZAC Day 1918, and promoted to T/Cpl four days later. On 15 May he joined 9 Light Trench Mortar Battery and served with them for the remainder of the war. He embarked for return to Australia on 11 May 1919 and reached Melbourne on 27 June. He was discharged from the AIF on 7 August 1919. During his time in England, Marr visited Scotland on leave where he met Miss Grace Gibson Prentice. She emigrated to Australia after the war and they were married in 1922. They had no children and when her husband died in 1968 she returned to Scotland to be near her family. Feeling that his medals should be returned to Australia, Mrs Marr's extended family sent them to a distant relative of T/Cpl Marr who donated them to the Australian War Memorial.