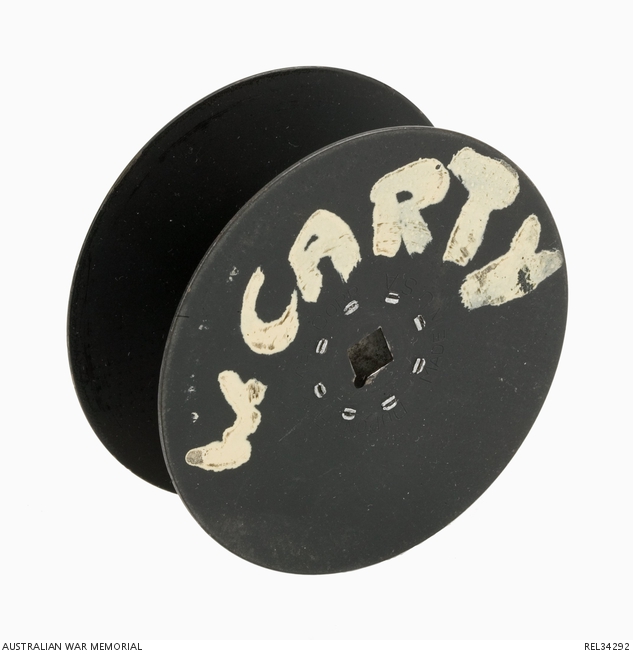 Standard 100 foot daylight loading film spool for 35 mm movie camera. The maker's details impressed into each side of the spool face. One face has been marked crudely in thick white paint "W. CARTY".

Standard 35 mm film spool as used with Bell & Howell and Eyemo movie cameras. Marked and used by William 'Bill' Carty. Bill Carty, born Paddington, NSW in 1908, finished school when he was 15 and frequently played hookey from school, when his mother used to take him and his sister to the matinees at the Lyceum in the centre of Sydney. His love of the cinema led to a meeting with Wally Sully, chief cameraman at Australasian Studios in Rushcutters Bay, who helped Carty obtain a job as a lab assistant, mixing chemicals for processing. His enthusiasm led to a position assisting the cameraman on Saturdays and Sundays. "I carried the tripod,' he says. 'When I decided to go to America one cameraman went through the whole rigmarole, and showed me the stops."

In America Carty managed to find a job in the Brooklyn lab of Warner Brothers, repairing negatives; this led to a position at Australasian Pictures in their New York office, working on two reeler shorts from Hollywood. "They were processed in Hollywood, and we'd re-edit and print the film. I only had a visa to stay for a year, then I went up to Montreal, my aunt had a friend there. I got a job adjusting the sound in a theatre." In 1932 Bill returned to his lab job in Sydney, "but I used to do camera work on the weekend and eventually I was working seven days a week, shooting newsreel. Occasionally you'd get a documentary film. Something would be happening in Sydney and I'd go and shoot that. Anything that was news."

By the start of the Second World War, Carty was married with three children and used his father's influence to avoid joining up directly – instead successfully lobbying for a position as a cameraman with the Department of Information, a position which would ultimately prove to be just as dangerous.

"I covered four campaigns as a cameraman with the Department of Information. I went to Darwin first after the bombing and saw air raids at night. ... I was there for two months. You would hear the Japanese aircraft coming. You could see them in the moonlight. Then they sent me to New Guinea."

It was here that he made films under the most difficult and dangerous conditions, filming the Cape Endaidare, Buna and Sananada campaigns in late 1942 and early 1943. At the Cape Endaidare assault, he was pinned by machine gun fire for most of the day, a coconut tree his only cover. Finally, he saw his chance to move. "I made my run. It was about a quarter of a mile before I got out of danger,'" he told Colin Simpson for a Sydney 'Sun' report in February 1943. "I sprawled three times on vines like trip wires and just sweated my way back. All the time I was afraid that a sniper would get me. I kept thinking about Molly, my wife, and the three kids at home. I think I lost a few pounds that day."

Like Damien Parer and Neil Davis, he understood that outstanding footage couldn't be gained from the rear of the fighting - he had to be in with the forward troops. But he was aware that he placed his life in danger every time he accompained the troops.

As the war progressed "I went further and further through Asia. Of course, it was dangerous, but there were no pictures at the back. If you are out in the wide open spaces getting shot at with the troops, you are a lucky guy if you came out of it. And I was lucky right through. I was in about five or six attacks."