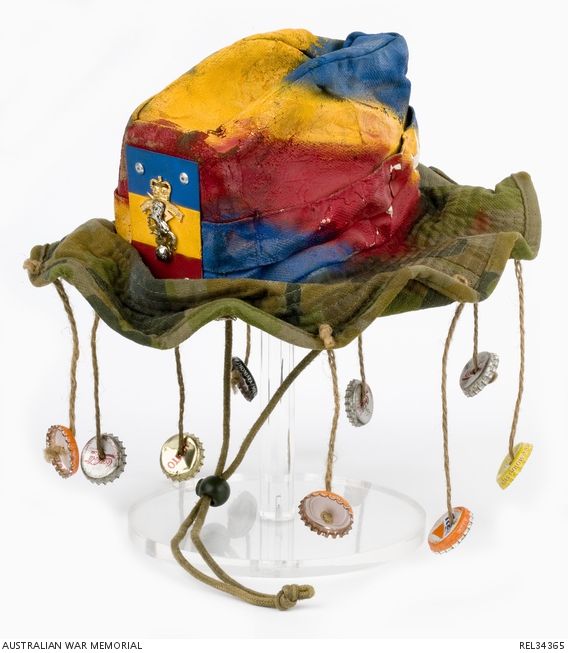 Disruptive Pattern Camouflage Uniform bush hat decorated to resemble a traditional Australian swagman's hat. The crown has been painted red, yellow and blue and nine soft drink bottle caps have been attached around the brim on the ends of 10 cm lengths of string.The bottle caps include three Fanta caps, three Coca Cola caps, a Cocktail de Fruits cap, a Sol Pearl cap and a Vimto cap. Some of the coloured paint has come off the hat, showing the original camouflage, or white paint underneath. A rectangular metal plate has been attached to the front of the hat, with a corresponding piece on the interior of the hat, riveted together through the fabric. The metal plate on the front of the hat is also painted blue, yellow and red and has the badge of the Royal Corps of Australian Electrical and Mechanical Engineers attached to it. The metal plate inside the hat has 'IN' written in black marker. The hat tag has a name, or part of a name written in green ink 'HOFF'.

Painted bush hat associated with service in Operation Anode, the name of the Australian Defence Force (ADF) contribution to the Australian-led Regional Assistance Mission to the Solomon Islands (RAMSI). RAMSI's assistance is known as Operation Helpem Fren (Pidgin English for 'Helping Friend'). RAMSI is a partnership between the Solomon Islands and contributing countries of the Pacific region. It is a long-term exercise to help restore stability and peace to the Solomons, and to encourage the development of their economy. RAMSI was initially deployed on 24 July 2003, with a mandate approved by the Solomon Islands National Parliament, to help the Solomon Islands Government restore law and order, strengthen government institutions, reduce corruption and revive the economy. Fifteen countries contribute personnel to the mission, which includes police officers, military personnel and civilians.