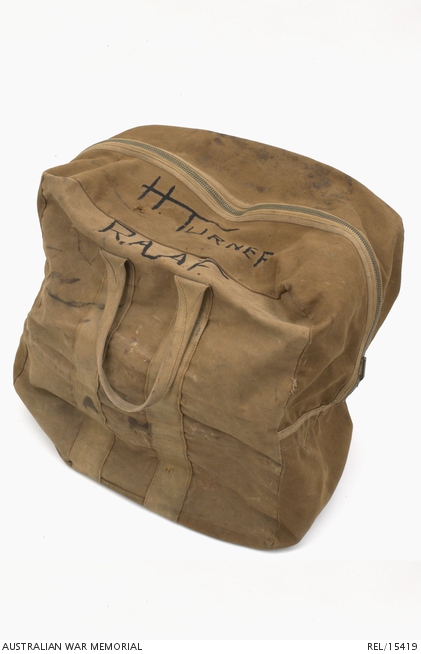 Rectangular khaki canvas parachute bag. The bag has central canvas strap handles which extend down and around the bottom as reinforcement bands. The bag is secured across the top and halfway down the sides by a zip fastening. The top of the bag is marked 'H. TURNER R.A.A.F.'. Both sides are stamped with a King's Crown and 'AM'. Inside the bag are two canvas panels to protect the parachute in transit. One panel had three press studs.

Used by 409620 Flying Officer Herbert Gladstone Turner. Turner was born in Wellington, New Zealand in March 1918. He originally applied for the RAAF, but was called up for Army service. He then joined the RAAF on 12 September 1941 as a Leading Aircraftman, but during the course of the war was promoted to Flying Officer and became a Spitfire pilot. He was discharged as a flight lieutenant on 15 December 1945.

during his service with the RAAF as a Spitfire Pilot. Turner origianlly applied for the RAAF, but was called up for Army service. He later transferred to the RAAF as a Leading Aircraftman before becoming a pilot.