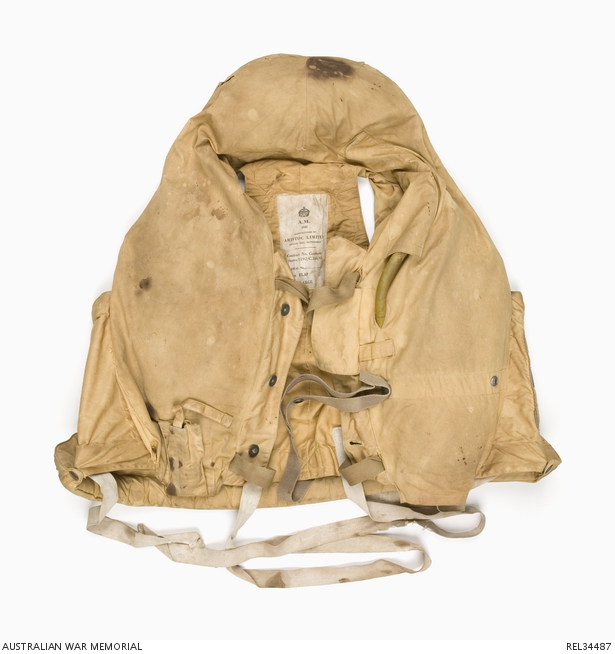 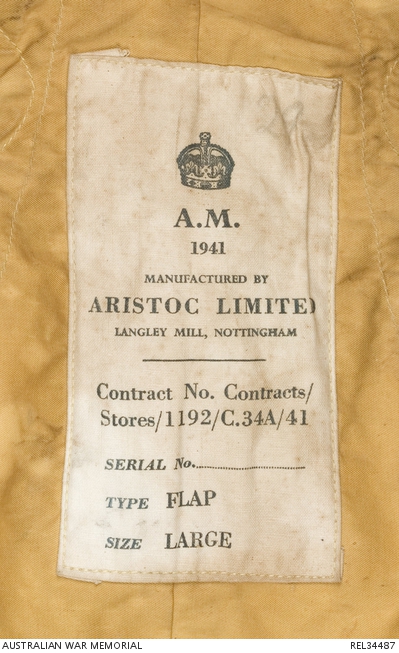 Yellow Air Ministry 1941 pattern Mae West life waistcoat of yellow cotton twill, fitted with inflatable internal bladders in a stole pattern at the chest and neck. The lower right front of the waistcoat is fitted with a carbon dioxide cylinder with a chrome-plated actuating lever for instantaneous inflation. Each frontal lobe and the collar is also fitted with a kapok pad; a zipper is fitted to the base of the collar to allow access to the filling and bladders. The front of the waistcoat is secured by three dished brass buttons and two cotton tape ties, and is supplied with two pairs of cotton leg ties. The rear is fitted with a triangular flap, the apex sewn to the collar and each corner attached via snap fasteners to the lower rear corner of the waistcoat. A roll of sponge rubber is sewn into an internal channel along each side of the flap. The left rear of the coat is fitted with a flap, designed to be torn away using a fitted cotton tape. This originally held a green dye pocket which could be released into the water. A label sewn to the inner collar reads '(crown symbol) / A.M. / 1941 / MANUFACTURED BY / ARISTOC LIIMITED / LANGLEY MILL, NOTTINGHAM / Contract No. Contracts/ Stores / 1192/C.34A/41 / SERIAL No____ / TYPE : FLAP / SIZE : LARGE'.