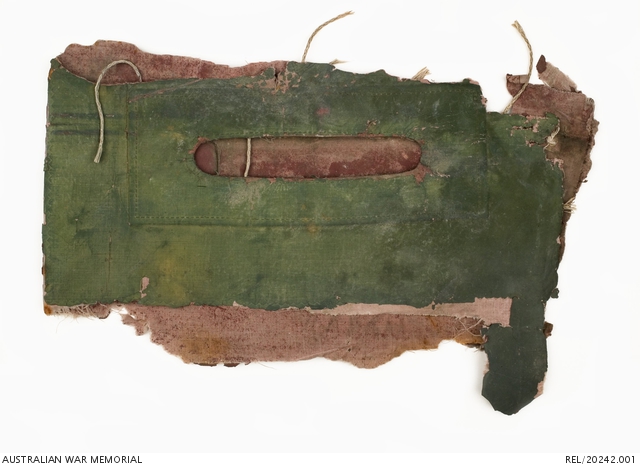 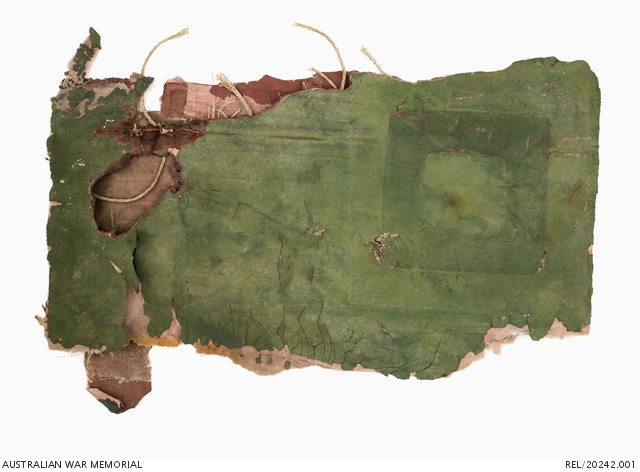 Piece of fabric from the rudder of RAAF P-40E-1-CU Kittyhawk fighter aircraft A29-133. This sample of fabric was removed from the rudder during early restoration work in the 1960s, and was acquired with the aircraft in 1992. The fabric is believed to be aircraft grade linen and has been finished in a succession of protective coats ranging from red primer to green camouflage finish. The sample includes a reinforced fabric rectangle to provide access for the rudder control cable. A number of edges and seams have been reinforced with additional fabric sections featuring pinked edges.

This P-40E -I-CU and was constructed by the Curtiss Wright Corporation at their factory in Buffalo, New York, USA. It was shipped to Australia and was received by 2 Aircraft Depot in Richmond NSW 8 June 1942 and allotted the serial number A29-133. It was issued to 75 Squadron on 17th June 1942 and was subsequently flown mostly by 402342 Flight Lieutenant Bruce (Buster) Brown who named the aircraft 'Polly' after his then girlfriend later wife.

P-40E-1-CU arrived at Milne Bay in late July 1942, where the aircraft of 75 and 76 Squadron were being concentrated to oppose the Japanese advance in Papua New Guinea. Air combat against Mitsubishi Zero aircraft of the Imperial Japanese Navy commenced on 4 August and A29-133 is known to have been attacked by two Zeros and received damage on 11 August in an air battle with 12 Japanese fighters. Four RAAF pilots were killed and Brown flying A29-133 was credited with shooting down an enemy aircraft. As August progressed it became clear that Milne Bay would be an important objective for the Japanese who were expected to attempt a landing in force on the morning of 25 August. Reports were received of Japanese barges and naval vessels in the area, together with a report of a barge landing at Goodenough Island. Shortly after midday the aircraft form 75 Squadron attacked and destroyed seven barges at this location. Later the formation attacked a large Japanese convoy on route to Milne Bay. Brown's logbook records that he participated in both attacks flying 'Polly'

The Japanese landed on 26 August 1942 and finally withdrew by 7 September. In the first five days of the operation the Kittyhawks of 75 Squadron were heavily involved in strafing the Japanese troops in support of the defending allied ground forces. A29-133 was heavily involved in all of these operations. In February 1943 75 Squadron was again based at Milne Bay and A29-133 rejoined the unit in early March. On 14 April the machine was flown by W.S. Arthur DFC in action against a large force of Japanese aircraft which were attacking the airfield. Arthur was decorated for this action with a Distinguished Service Order (DSO). On 2 June the Kittyhawk was damaged when a tyre blew out on takeoff. It was repaired by 10 RSU (Repair and Salvage Unit) and returned for service until early September when it was transferred to 82 Squadron. It was again damaged on 17 October during a landing accident in Bankstown NSW and was later converted to an instructional airframe and was posted to 1 Engineering School in Victoria. The aircraft was disposed of by the Department of Aircraft Production, circa 1947, and changed ownership several times before the Australian War Memorial purchased it in 1992.