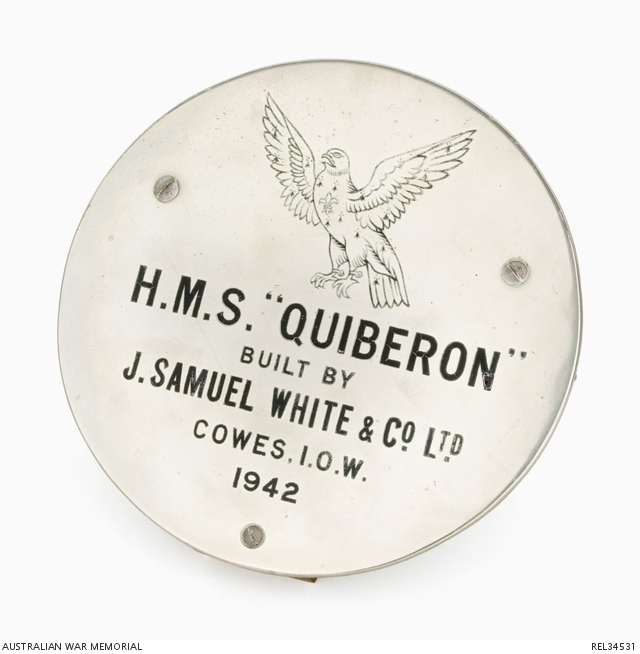 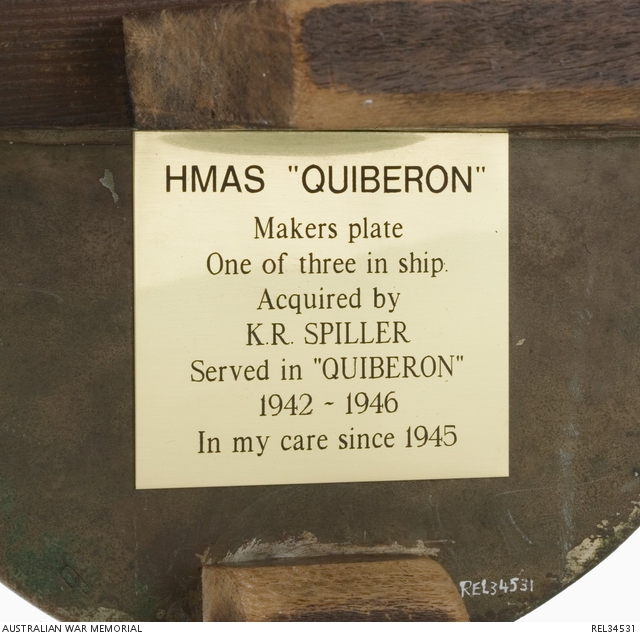 Circular metal makers plate with an image of a hawk together with the words 'H.M.S. "QUIBERON" BUILT BY J. SAMUEL WHITE & CO. LTD. COWES.I.O.W. 1942'. The breast of the hawk is charged with the Fleur de Lys while the words have been infilled with bitumen. On the back of the plate is a plaque engraved with 'HMAS "QUIBERON"' Makers plate One of three in ship. Acquired by K.R. SPILLER Served in 'QUIBERON' 1942-1946 In my care since 1945'. The plate has been fastened to a timber plinth using three brass screws. Attached to the plinth is a plastic screw-in hook.

This plate was acquired by R/56039 Constable Kenneth Robert Spiller in 1972 after HMAS Quiberon was sold for breaking up to the Fujita Salvage Company Limited of Osaka. Before the destroyer was towed to Japan on 10 April 1972 naval crew who had served on the Quiberon were invited to come aboard the destroyer and take a memento from it.

HMAS Quiberon was one of eight Q Class destroyers built for the Royal Navy, although Quiberon was commissioned in the Royal Australian Navy at Cowes, Isle of Wight, on 6 July 1942. Following commissioning and manned by an Australian crew, Quiberon proceeded to Scapa Flow. In October 1942 the ship formed a unit of the large British naval forces assigned to support the Allied landings in North Africa (Operation Torch). On 28 November 1942, while operating off the Tunisian coast north west of Bone in company of HMS Quentin, Quiberon attacked and destroyed the Italian submarine Dessie.

On 1 December 1942 Quiberon formed a unit of a force of three cruisers and three destroyers despatched from Bone, Tunisia, to intercept an enemy convoy reported bound from Sicily to Tunis. Contact was made in the early hours of 2 December and all four ships of the convoy and the escorting Italian destroyer Lupo were sunk, HMS Quentin was sunk by an aircraft torpedo on the way back to Bone and at dawn Quiberon, while under heavy air attack, was called upon to rescue Quentin’s complement.

Quiberon operated in North African waters on convoy and fleet escort duties for the remainder of December 1942 and throughout January 1943. On 21 December the ship took off survivors from the burning liner Strathallan which had been torpedoed off the Algerian coast by a U-Boat. At the end of January 1943 Quiberon left the Mediterranean as a unit of the escort of a convoy bound from England to Capetown. The convoy arrived at Durban on 27 February and from there Quiberon proceeded to Australia, arriving at Fremantle on 29 March, having steamed 51,000 miles on war service.

After refitting at Melbourne, Quiberon returned to the Indian Ocean and at Kilindini, Kenya, in June 1943 joined the British Eastern Fleet. In 1944 the ship continued serving as an escort destroyer of the Eastern Fleet protecting convoys proceeding mainly between India and Aden. Quiberon took part in the carrier air strikes against Sabang in April 1944 and Sourabaya in May 1944, before returning to Australia for another refit at Melbourne. Quiberon rejoined the Eastern Fleet at Trincomalee, Ceylon, on 1 August 1944 and resumed escort duty in the Indian Ocean.

In October 1944 the ship took part in a series of fleet bombardments of the Japanese held Nicobar Islands. In mid December Quiberon detached from the Eastern Fleet and returned to Australia, where for the next few weeks she operated as an escort and anti-submarine vessel on the Australia Station. In March 1945 Quiberon proceeded to Manus, the United States base in the Admiralty Islands, as a unit of the British Pacific Fleet. From Manus the ship proceeded north to the operational area and was thereafter until the end of hostilities actively engaged in the closing phases of the war at sea against Japan. Quiberon took part in operations in support of the American seizure of Okinawa and subsequent attacks on the Japanese homeland. When the war ended in August, Quiberon had steamed 236,000 miles on war service. Quiberon’s service career ended when the ship was paid off to Reserve on 26 June 1964.

Quiberon was sold on 15 February 1972 for breaking up to Fujita Salvage Company Limited of Osaka, Japan, for $68,260.00. On 10 April 1972 the Japanese tug Sumi Maru No 38 left Sydney for Japan with Quiberon and another former RAN vessel, Tobruk, in tow. R/56039 Constable Kenneth Robert Spiller was born on 19 August 1921 at Camberwell in Victoria. He enlisted in the Royal Australian Navy on 5 June 1940 and served on both HMAS Quiberon and HMAS Lonsdale. Spiller was discharged from the Navy on 23 February 1966.