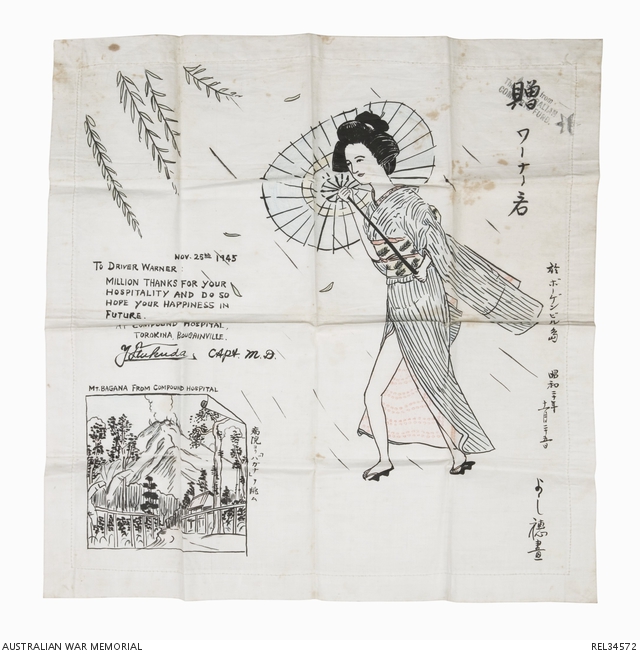 In the top left corner are four branches of hanging leaves blowing in the wind. Written in black ink, in English, underneath the branches is 'NOV. 25TH 1945 / TO DRIVER WARNER / MILLION THANKS FOR YOUR / HOSPITALITY AND DO SO / HOPE YOUR HAPPINESS IN / FUTURE. / AT COMPOUND HOSPITAL, / TOROKINA, BOUGAINVILLE. / Y FUKUDA CAPT. M.D.' Beneath the letter is drawn a picture of a camp in the jungle, looking up to a mountain with smoke rising from it's peak and clouds in the sky. The top right of the picture has been drawn slightly curled as if it is a poster coming unstuck. Written in English over the top of the picture is 'MT. BAGANA FROM COMPOUND HOSPITAL.' Written down the right side of the picture in Japanese is 'LOOKING AT MOUNT BAGANA FROM COMPOUND HOSPITAL.'

Associated with the service of NX149568 Driver Iver James Warner, who was born on 25 October 1921 in Winchelsea, Victoria.

Warner enlisted in the CMF on 16 March 1942, and was posted to the 114 Reserve Motor Transport Company. After joining his unit, he was granted a period of leave without pay, so that he could assist his family with the seasonal sheep shearing.

He returned to his unit on 16 December 1942 but went absent without leave (AWL) on 2 January 1943, and was struck off the 114 Reserve Motor Transport Company's strength on 26 January. Warner remained AWL until 23 July, when he handed himself in to the Army. He was sent to Geelong, Victoria, where he was charged on 26 July for being AWL for over six months. He was fined 3 pounds and forfeited 203 days pay.

On 10 August, he was posted to 2 Australian Army Service Corps (AASC), where he remained for two months. He was again given leave without pay, to return to the family's farm to shear sheep. He returned to 2 AASC on 1 January 1944.

Warner embarked from Brisbane on 5 June 1945 in the transport ship Duntroon, disembarking five days later at Bougainville. He was posted to 66 Transport Platoon based at Torokina, where he drove ambulances carrying wounded and sick Japanese soldiers. His caring nature, and efforts to assist the Japanese soldiers and medical staff, earned him high praise from the Japanese. The Japanese medical staff gave him gifts they made or decorated, to show their appreciation.

Warner returned to Australia, disembarking in Townsville on 29 April 1946. He returned to Victoria where he was discharged from the AIF on 29 July 1946.