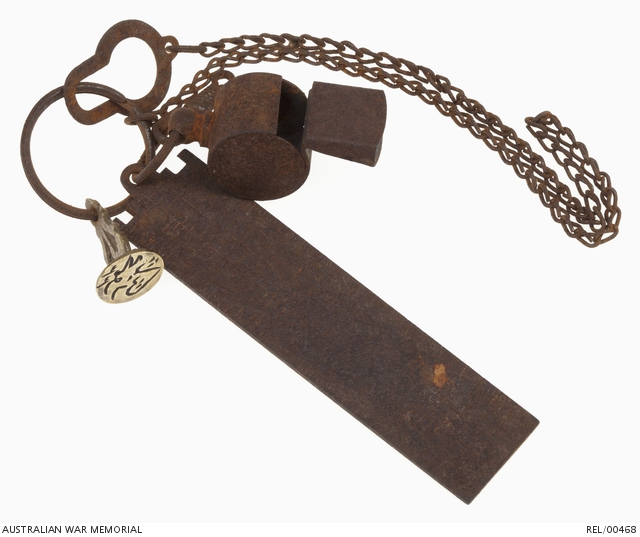 Split metal keyring on which is suspended a small tin pea whistle, a brass personal signet seal with Turkish characters, an M15 75 mm steel gauge for testing a gun barrel's rifling and a steel button mount and chain. Excepting the brass seal, all items have suffered a degree of rust damage. The pea whistle is missing the pea, and incorporates a metal suspension ring. The seal is cast, with a small decorative handle and there are machined lines across the face, which bears an engraved name in arabic. The steel gauge (100 mm long by 25 mm wide) bears a suspension hole and a pair of square inserts at one end. Both sides are marked up as a ruler in mm on each edge, with the centre marked in equal gradations. One side is impressed 'M15 73 cm'. Finally, a shaped steel button mount with attached metal chain is hung on the keyring; this presumably originally carried the whistle.

Item of Turkish artillery equipment and personal items recovered by 2989 Frank Ernest Brett, who enlisted with the AIF on 14 February 1916 aged 25. A Hall and Billiard Room Manager from Sans Souci, NSW, Brett was assigned to B Troop, 7th Australian Light Horse Regiment. He attended Signals School from 1 March to 3 April 1916 and after further training, embarked from Sydney aboard the transport 'Katuna' which departed on 23 November and disembarked at Suez, Egypt on 2 January 1917.

Taken on strength of 7th Light Horse Regiment in late January, Trooper Brett attended a month's refresher course in Alexandria (including a Cable Course) before being assigned to B Troop 2nd Signal Squadron, Imperial Mounted Division, on 9 March. He was detached for duty with the Signals Desert Column, Cable Section on 14 July 1917. A year later, he returned to 2nd Signal Squadron and was promoted to Lance Corporal on 17 September. Brett contracted malaria in late January 1919 before being returned to Australia aboard the 'Euripides' in March. He was discharged on 20 June 1919.

Brett did not disclose where he recovered these items from, but it is likely they came from the Palestine theatre of operations. The gauge is an item of German equipment, used to measure the wear to the rifling in the barrel of an artillery piece and relates to a Model 1915 item - possibly a 75 mm gun.