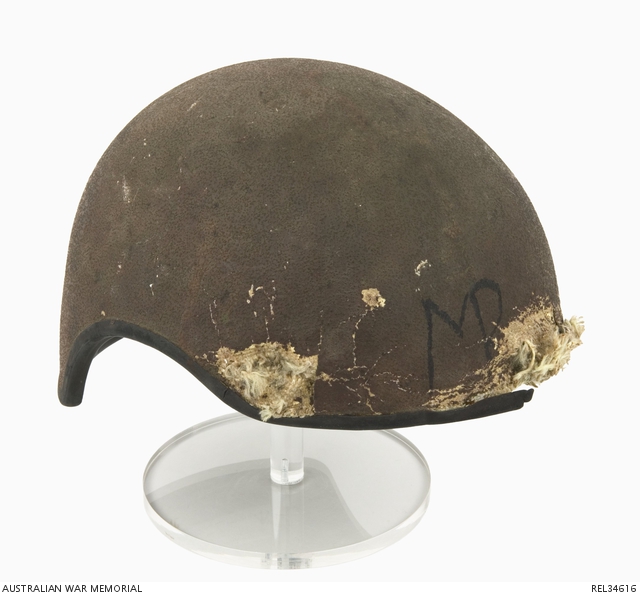 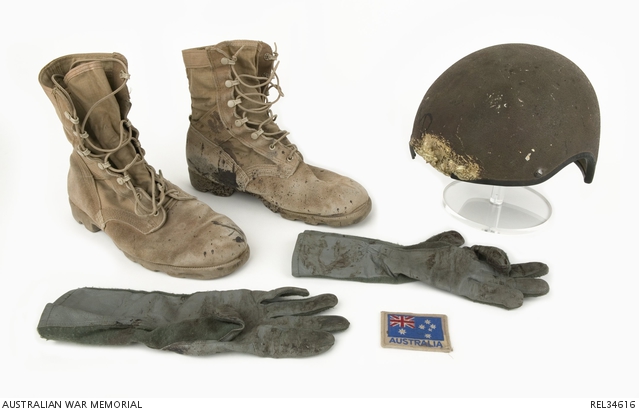 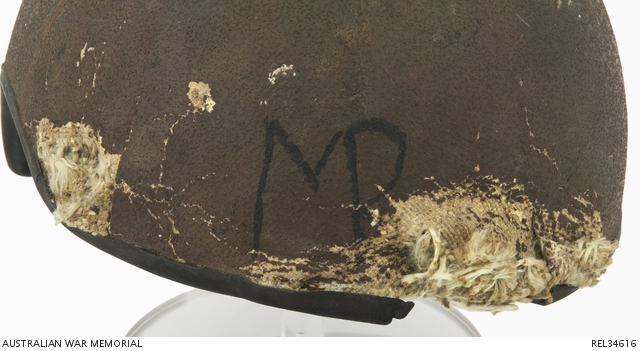 Ballistic Shell, Combat Vehicle Crewman Helmet. The shell is the outer piece of the DH-133A CVC helmet system. The shell is made up of a Kevlar ballistic fabric, which is covered with a walnut shell flour. This causes the rough effect on the outer surface. The shell is 10 mm thick and the outer edge is lined with black neoprene. The left and right sides of the shell are contoured to fit the helmet liner which contains communications headphones. At the back of the shell is a metal press stud. Above the press stud are the letters 'MR' written onto the helmet in black permanent marker. The inner part of the shell is lined with a rubberised compound and has a rectangular Velcro pad glued into the crown.

Near the base of the shell, on the right, is a white stick on label with the maker's details 'BALLISTIC SHELL, COMBAT VEHICLE CREWMAN HELMET / LARGE / 8470-66-140-6674 / Z0665/999-9-49667-002 / 97427/95B9184-2 / GENTEX CORPORATION' printed in black. In the middle of the label has been stamped '11/95' in black ink and in the lower right of the label is printed the broad arrow symbol. Above this sticker, stamped in black on the shell's inner lining, is another broad arrow symbol. At the left temple, a press stud attached to an adjustable nylon strap is screwed into the shell. The right strap has been torn out from the inner. On the outer side, there is a shrapnel impact mark visible. The front of the helmet also has visible impact damaged caused by shrapnel. Around the front of the helmet, smaller shrapnel strikes are also visible. Partly obscured by the damage are the letters 'MR' written onto the helmet in black permanent marker.

Captain Garth Callender was wearing this helmet when wounded in a Vehicle Borne Improvised Explosive Device (VBIED) attack on his Australian Light Armoured Vehicle (ASLAV) in Baghdad on 25 October 2004.