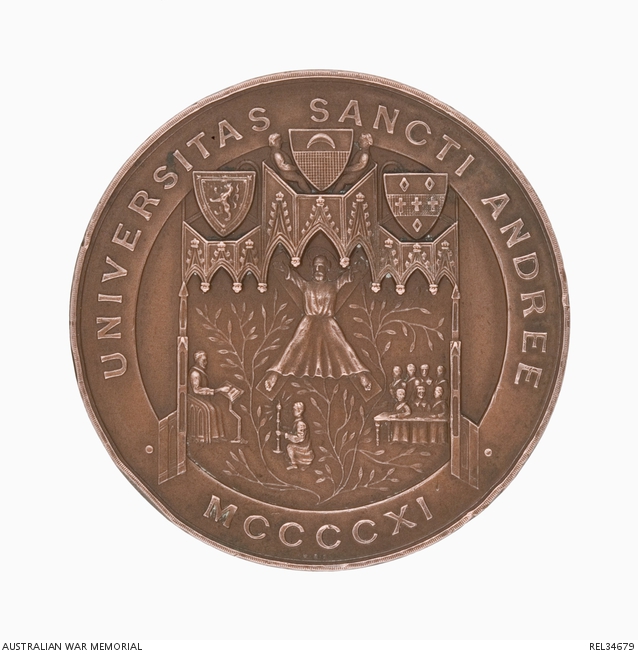 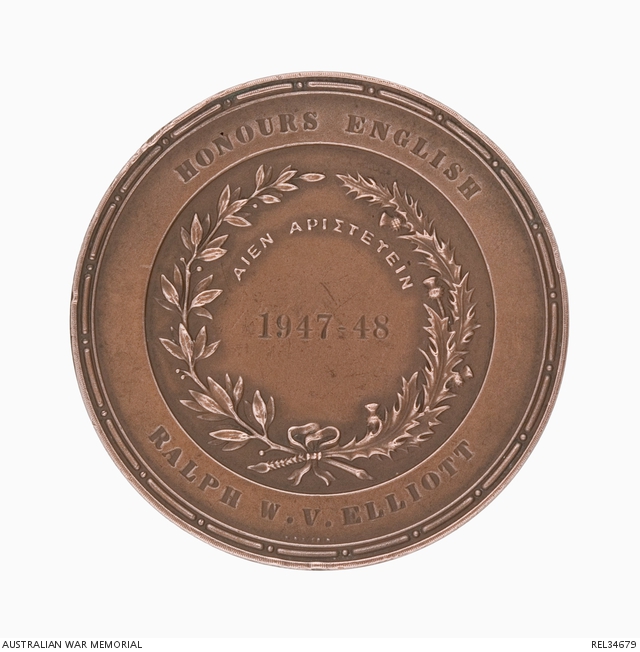 Bronze medallion featuring the words 'UNIVERSITAS SANCTI ANDREE / MCCCCXI' around the circumference, enclosing a design of the interior of a medieval hall. The reverse features a plain outer circumference and an inner wreath. The outer band is engraved 'HONOURS ENGLISH / RALPH W.V. ELLIOTT' and the inner wreath '1947-48'. Stored in its original issue jeweller's box.

Associated with the academic career of Ralph Warren Victor Elliott (Rudolf Ehrenberg). Elliott was the son of Kurt Phillip Rudolf Ehrenberg, born 31 January 1893, who served with the German Army in France in WW I. A member of an academic family whose ancestors include Martin Luther, Kurt Ehrenberg was an architect based in Berlin who married a Jewish woman after the war and had a daughter and a son, Rudolf. Rudolf Ehrenberg was born on 14 August 1921 and attended the Bismark Gymnasium in Karlsruhe from 1931 until 1936. Soon after the family moved there, they began to feel the growing effects of anti-Semitism. One day Rudolf’s German language teacher arrived for lessons clad in full SS uniform; Kurt’s car was requisitioned by the SA and Kurt’s brother (also named Rudolf), Professor of Biology at the University of Gottingen, was stripped of his post and sent to serve with the Labour Corps. As a result Kurt Ehrenberg decided to get his family out of Germany. His daughter married and emigrated to the United States and his son Rudolf was sent to stay with his uncle, Max Born in Edinburgh (Born later won the 1954 Noble Prize in Physics and had devoted much time in 1915 and 1916 as a member of the German Army developing the theory of sound ranging). Kurt and his wife only managed to escape two weeks before war was declared in 1939. Rudolf attended St Andrews University, Fife, Scotland, in 1939-40 before he was interned as an alien and sent to Canada. Ten months later he was brought back and offered a position in an Aliens Pioneers Company. On 12 May 1943, Rudolf Ehrenberg changed his name to Ralph Warren Victor Elliott. His performance in the Pioneers Company led to an offer of officer training at Sandhurst, where he was awarded the Sword of Honour (during wartime Britain, shortages of material meant he only received a medallion, not the sword). His proud father, also interned by the British authorities for a period, managed to attend the ceremony. Lieutenant Elliott was soon posted to the Leicestershire Regiment. He joined them just as they were recovering from a mauling in the Belgium forests in early 1945 and were withdrawing to rebuild the unit. He was then transferred to the Manchester Regiment in April 1945, placed in charge of a company as they crossed the Rhine and entered the Teutoburger Wald. The thickness of the woods forced their supporting tanks to divert around the wood, and his company soon come under determined attack from fanatical SS and Hitler Youth, wounding many of his company including himself. Elliott was shot through the middle and spent hours trying to remain conscious to stay alive. He asked a passing German for 'wasser bitte' in fluent German and the surprised man flung him his water bottle. A counterattack headed by a British artillery barrage forced the Germans to retire and Elliott was rescued by a stretcher party of Desert Rat veterans. He then lapsed into unconsciousness. He survived and credited his life to the recent introduction of penicillin. Elliott returned to St Andrews, receiving honours in languages and eventually immigrated to Australia with his family and father to lecture in medieval languages at Adelaide. His contribution to Australian society was recognised in 2001 with the award of the Centenary Medal.