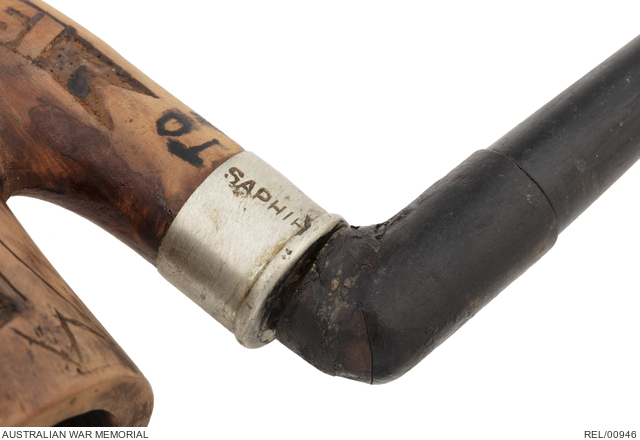 Walnut pipe of the Oom Paul or billiard shape. The bowl is carved with the following shapes, names and dates: in a scroll on both sides of the shank- "1900" on the right of the shank - "1901" on the left; in a scroll on the lower part of the bowl "BOER WAR / STH AFRICA"; in a shield on the front of the bowl: "1899". In addition the owner has added (in black ink) at a much later date: "-2" to the date; "SAKA - BONA" [a Zulu word meaning 'we see you'; originally in Zulu 'sakubona'] above "BOER WAR" ; "PEACE" in the centre of the shield; and "TO GEN. CHB: 1952" on the base of the shank. The polished wood finish normally expected from a pipe is missing except for a small section of the bowl adjacent to the upper part of the shank - the rest of the bowl has been denuded of polish and is raw wood.

The upper part of the shank is equipped with a white metal sleeve on which the brand name, 'SAPHIR' or 'SAPHIRE' is evident.

The pipe stem (which normally would have a gently curving stem) has been replaced with a straight stem with a handmade elbow joint with a copper centre, and supplied with a cork washer. This has produced a pipe shape with the stem at 90 degrees to the pipe bowl.

Probably a pipe made by a Boer prisoner and later given to Charles Henry Brand in 1952, when he was President of the South African Soldier's Association. Brand was born in Ipswich on 4 September 1873 and served in the Boer War in the 3rd (Queensland Mounted Infantry) Contingent. Although he volunteered for furtherservice with the 7th Australian Commonwealth Horse, the war ended while they en route to South Africa.

Brand was a career solider; he joined the permanent forces in 1905 and in 1909 served in India on exchange. He served in the First World War on Gallipoli (where, as brigade major of the 3rd Infantry Brigade, and later lieutenant-colonel commanding 8th Battalion, he was awarded a DSO), and in France at Pozières, Bullecourt, Messines, Polygon Wood and Passchendaele. At war's end he was invested at Buckingham Palace with the C.B., C.M.G. and D.S.O. He was also eight times mentioned in dispatches.

Retiring from the army in 1934 with the rank of major general, he went into politics where he represented the United Australia Party in the Victorian Senate; he won and held the seat until June 1947. Charles Brand died in 1961, aged 87.