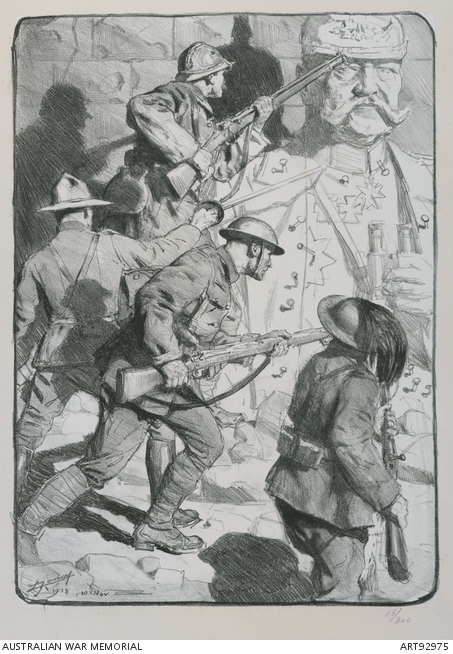 The last nail being hammered into a wooden effigy of General Hindenberg, signifying victory over Germany and the end of the First World War. The four soldiers represented are an Italian, a Frenchman, an American and a British soldier, showing the Triple Alliance and the enemy, represented by Hindenberg. This lithograph was reproduced in the French magazine 'Les Annales Politiques et Litteraires (No. 1880)'.

Lucien-Hector Jonas was born at Anzin in France on 8 April 1880. He studied first at Valenciennes with Layraud then went to Paris to study with A Maignan and Bonnat. He joined the Societaire des Artistes Francais in 1904 and was awarded third class medal in 1905, second class medal and a scholarship to travel in 1907, the Prix du Salon in 1911, and the second Prix de Rome and the chevalier de la Legion d'Honneur. During the First World War he produced several posters for the French government. He died in Paris in 1947. (biog. translation from Benezit, vol. 6, p. 93).