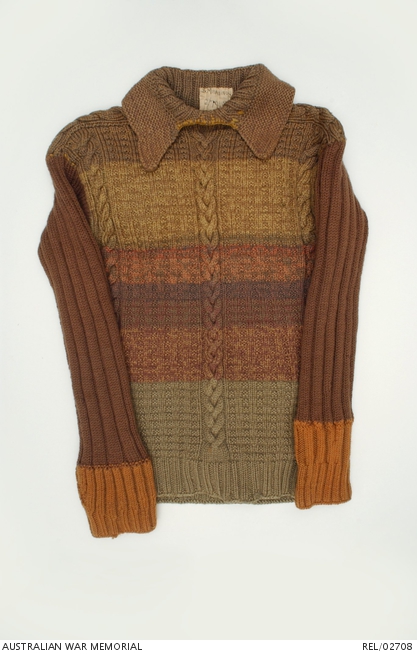 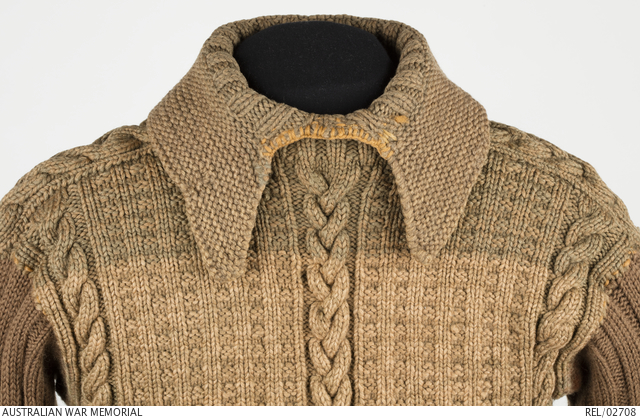 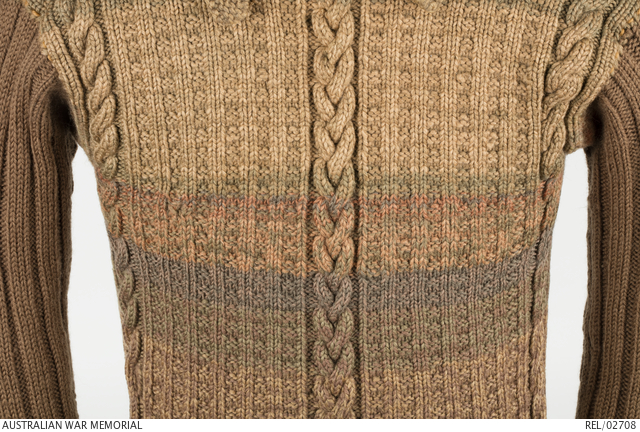 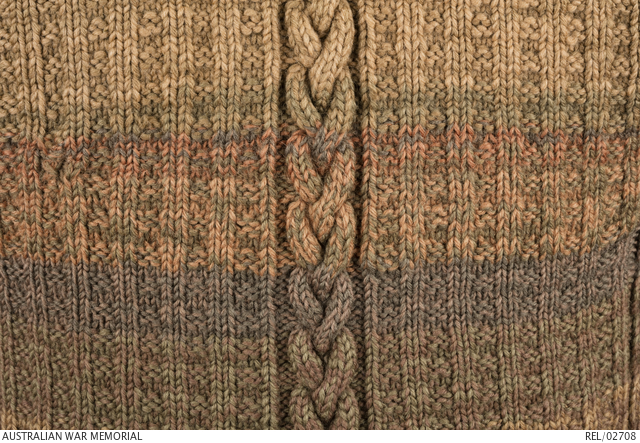 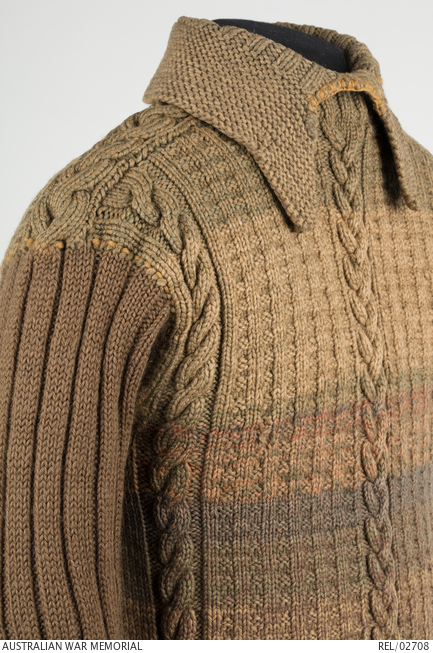 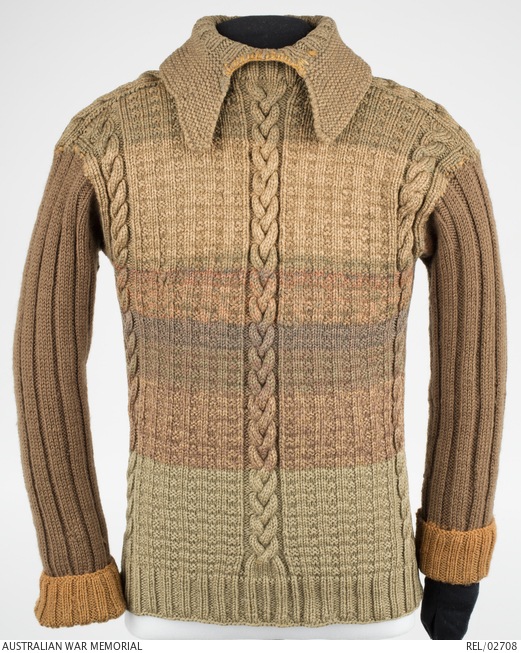 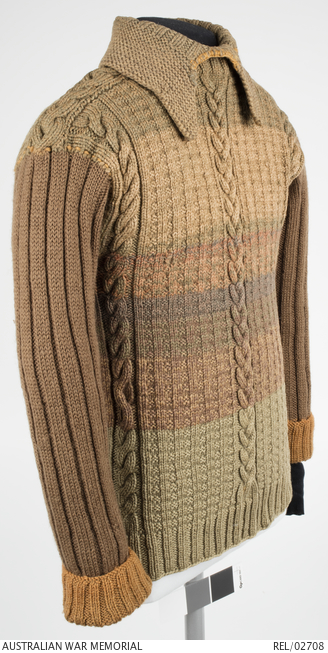 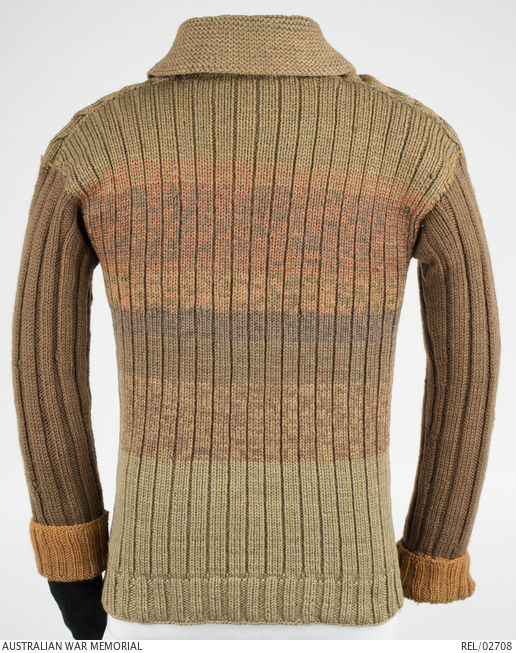 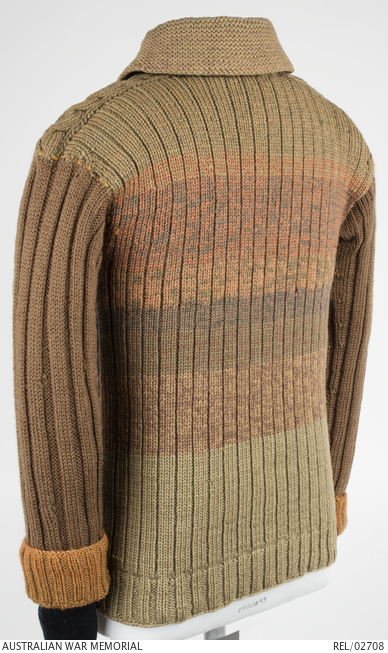 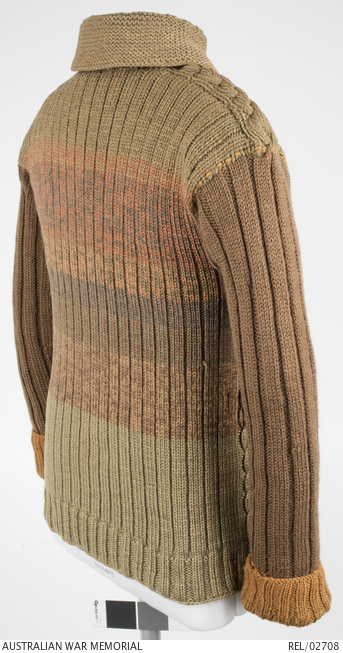 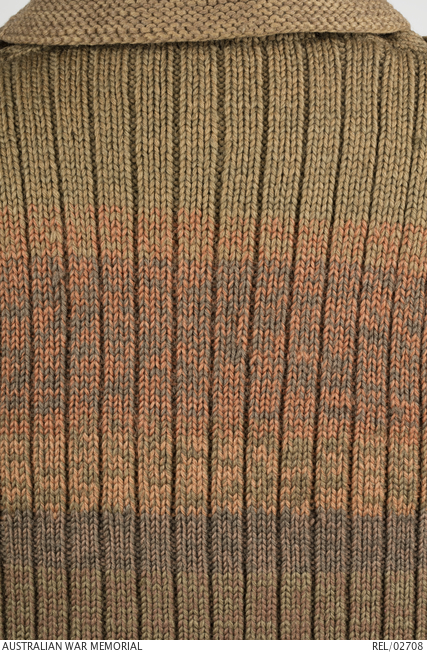 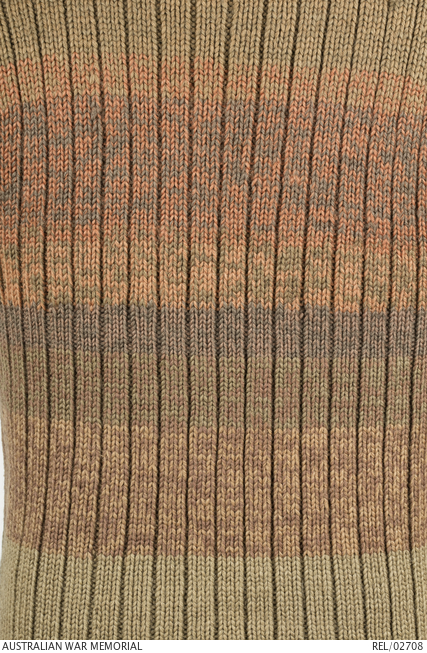 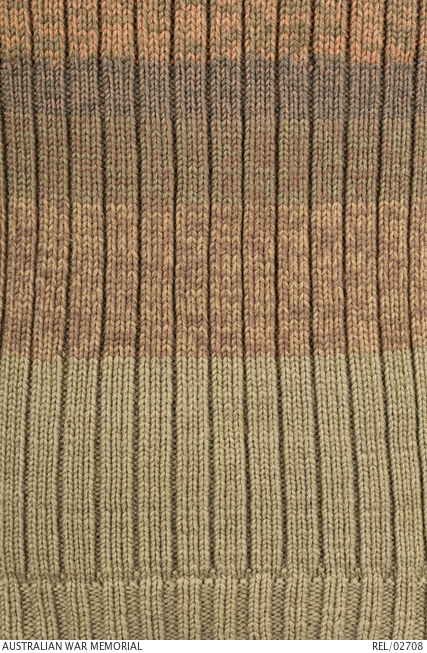 Hand knitted pullover with a fall collar in shades of green, khaki, brown and ochre 12 ply wools blended to form a striped effect on the body only. The sleeves are brown with ochre cuffs and the collar and shoulders khaki. The front of the body had three vertical rows of cable stitch separated by panels of blackberry stitch. The back and sleeves are ribbed only. The top of each shoulder has been knitted in cable stitch to give a raised epaulette effect. The neck is ribbed but the attached fall collar is in garter stitch. Woollen buttonhole stitch has been used to reinforce the front neck opening. Photographic evidence of Marrinon wearing the pullover suggests that there may once have been a small hand embroidered Union Jack in this position. The inside neck has a linen name tag marked in black ink 'D.? MARRINON 2/79453'.

254 Private Joseph (Joe) Patrick Vidal Marrinon served with A Company, 31 Battalion, AIF. He enlisted on 15 July 1915, at the age of 23, and was a native of Suva, Fiji. At the time of his enlistment he was working as a storeman. Marrinon was captured by the Germans at Fleurbaix, near Fromelles, on 19 July 1916, when he was wounded in both thighs and one arm by a single bullet. He was held in Douai Hospital until November 1916, transferred to Dulmen Camp Hospital and then Dulmen Camp until May 1917, and was finally sent to Straumuhle Sennelager II at Paderborn. The bullet wound to Marrinon's arm passed between the radius and ulna of his right arm, severing the tendons that controlled his fingers. Despite some German medical treatment the hand remained in a closed ball throughout his imprisonment. A French sailor who was a fellow prisoner knitted Marrinon's pullover for him, using wool unravelled from worn out army socks and wire for knitting needles. Marrinon was repatriated to England in October 1918, receiving more treatment on his damaged hand, and returned to Australia on 16 March 1919 receiving further medical treatment in Sydney. The sleeves on his pullover were badly worn so his sister Beatrice knitted new ones for it in the 1920s. Marrinon died on 13 August 1964.