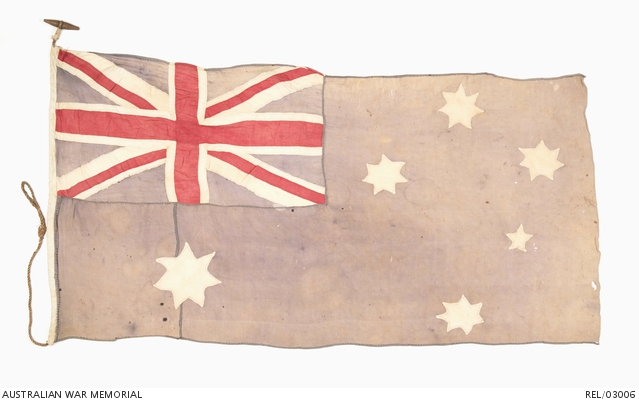 Australian flag made at Rajburi Camp in Thailand by Australian prisoners of war in 1944, from scrounged scaps of cotton and rayon (artificial silk) fabric. The flag's hoist was added at Nakom Paton Camp in September 1945.

Born in December 1918, Reginald Noel Farquhar was employed as an accountant when he enlisted in the AIF at Launceston, Tasmania on 25 June 1940. He had previously served as a sergeant in the militia, in 12/50th Battalion. Assigned the service number TX3589 and posted to 2/40th Battalion, Farquhar served in Darwin, where his battalion had been posted as a defensive garrison. At the end of 1941, in response to the Japanese advance in Asia, the battalion formed the nucleus of Sparrow Force, sent to defend Timor, arriving at Koepang on 12 December. Captured by the Japanese in February 1942 Farquhar was initially held at Usapa-Besar Camp, and then sent to Java, but was later sent to work in Thailand on the Burma-Thai Railway.

At Rajburi he was one of the makers of this flag, which was hidden to prevent it being found. Later at Nakom Paton Camp the Japanese allowed it to be used when Australians were being buried. The hoist was added to the flag at the end of the war and then flown at the camp. It was one of three flags flown over the camp on 16 September 1945, when peace was announced. Lieutenant Colonel Edward 'Weary' Dunlop, one of the doctors in the camp recorded in his diary:

'There followed a general assembly of all ranks, British, Australian, Dutch and American. Lt-Col. Coates in English, and later Lt-Col Larsen in Dutch, announced the historic, almost unbelievable events of the day. Immediately, long-hidden and cherished flags - the Union Jack, Australian and Dutch - were hoisted to the accompaniment of cheering, shouting, and in many cases, unashamed tears. Those flags seemed to fly proudly in a cleaner, fresher air, charged with deep, overwhelming emotion, a boundless joy still trailing robes of sadness.'

Farquhar was later evacuated by air to Australia. After hospital treatment he was discharged on 24 January 1946. He died in 1990.