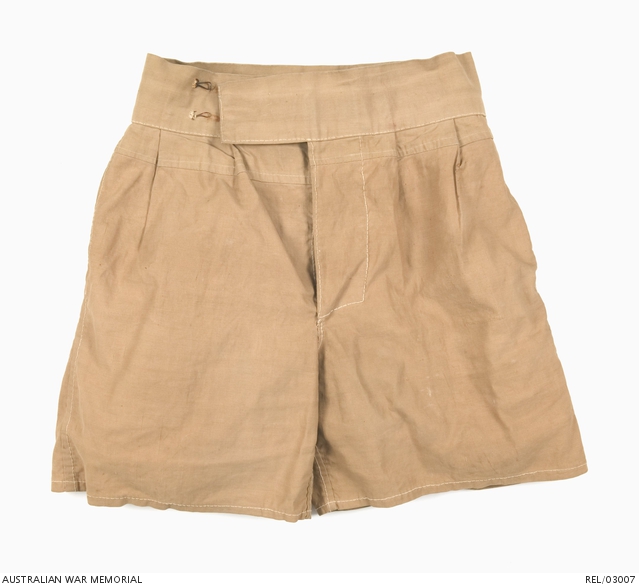 Pair of handmade khaki cotton shorts, with two metal fly buttons. A pair of improvised hooks and eyes close the waist band. The shorts are cut in a similar style to standard army issue garments.

Born in December 1918, Reginald Noel Farquhar was employed as an accountant when he enlisted in the AIF at Launceston, Tasmania on 25 June 1940. He had previously served as a sergeant in the militia, in 12/50th Battalion.

Assigned the service number TX3589 and posted to 2/40th Battalion, Farquhar served in Darwin, where his battalion had been posted as a defensive garrison. At the end of 1941, in response to the Japanese advance in Asia, the battalion formed the nucleus of Sparrow Force, sent to defend Timor, arriving at Koepang on 12 December. Captured by the Japanese in February 1942 Farquhar was initially held at Usapa-Besar Camp, and then moved to Java, but was later sent to work in Thailand on the Burma-Thai Railway.

Farquhar made these shorts while he was hospitalised at Rajburi in 1944. The fabric was scrounged from a railway truck being unloaded by prisoners, a needle made from wire and the thread taken from an old kitbag.

At the end of the war, in 1945, Farquhar was held at Nakom Paton Camp. He evacuated by air to Australia. After hospital treatment he was discharged on 24 January 1946. He died in 1990.