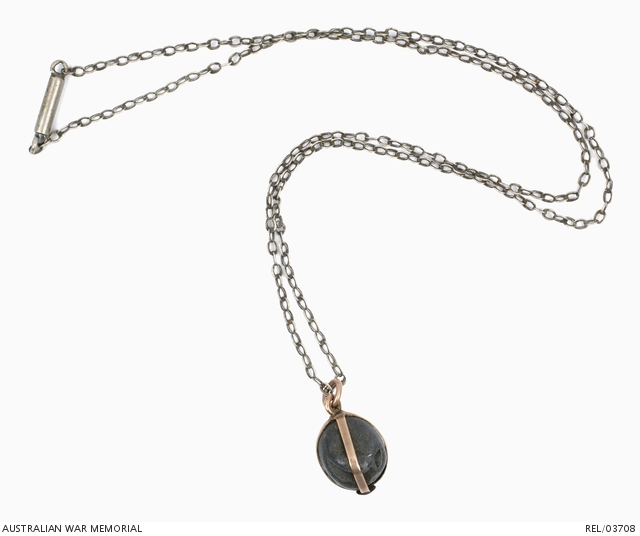 A circular shaped shrapnel ball fashioned into a pendant. Attached to this is a length of metal chain and small bar.

The piece of shrapnel featured in this pendant was removed from the left arm of James Slattery.

He sustained this wound on 25 April 1915 as a member of the 7th Battalion at Gallipoli. He later made the lead shrapnel ball into a pendant using chain from his identity discs.

Slattery was a single 27 year old when he enlisted into the Australian Imperial Force (AIF) on 22 September 1914. Allotted the service number 1179 and to the first reinforcements for the 7th Battalion, he embarked for overseas service from Melbourne onboard HMAT A32 'Themistocles' on 22 December 1914.

He landed at Anzac Cove on 25 April 1915 and was seriously wounded by Turkish artillery fire that day. He was evacuated and due to paralysis of his arm was returned to Australia on 15 November 1915 for demobilisation.