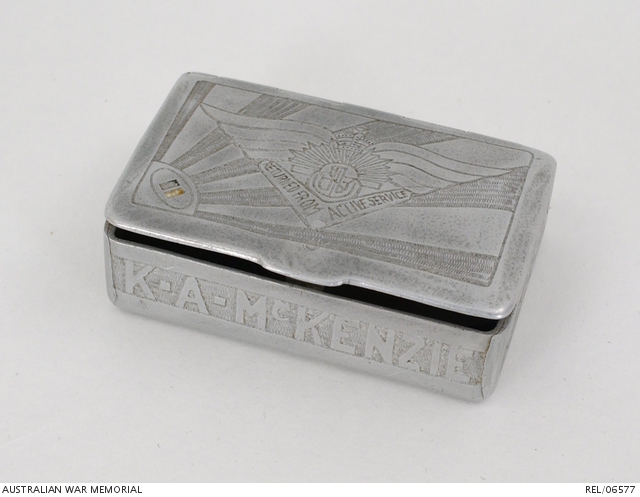 Small presentation tobacco box with hinged lid made from aluminium aircraft wreckage. A catch has been hand riveted to the inside of the lid. The lid is hand engraved with rays emanating from an oval in the lower left hand corner. The oval is inlaid with toothbrush handle plastic in the shape of the colour patch for 2/29 Battalion. Superimposed on the rays is an engraved representation of the Returned From Active Service Badge. The base is engraved with a horse's head within a horseshoe, a pair of spurs, jockey's cap and riding whip. The sides of the box are engraved 'VX64955 K.A. McKENZIE 2/29TH. BN. - MALAYA -'. The inside of the lid is engraved '21ST BIRTHDAY GREETINGS FROM HERMIE AND TICH'. The remains of black painted aircraft markings can also be seen inside the lid.

This box was made from a fragment of Japanese aircraft, as a twenty first birthday present, on 10 June 1945, for VX64955 Private Kenneth Alexander McKenzie of 2/29 Battalion, while he was a prisoner of war at Logas in Burma shortly before the end of the Second World War, by his friends 'Hermie and Tich'. 'Tich' was VX60334 Private Claude James Myors, from Albury, New South Wales, who was a member of the same battalion. The identity of 'Hermie' is not known. McKenzie's enlistment record gives his date of birth as 10 June 1922, but in fact he was born in 1924 and raised his age in order to enter the army, against the wishes of his mother. His maternal uncle, Edward Connors, a First World War veteran, signed his enlistment papers, and McKenzie was already in the army by the time his mother realised what had happened.

McKenzie and Myors were both recovered from Changi on 4 September 1945 and returned to Australia.