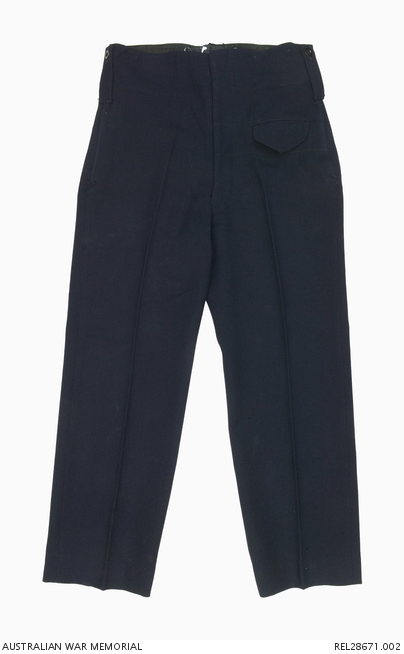 Pair of blue woollen serge battledress trousers with concealed six-button fly, pair of slash hip pockets, a buttoned change pocket adjacent to the left pocket and a pair of rear pockets with arrow flaps. Supplied with four buttoned waist belt loops and three pairs of buttons around the inside of the waistband for braces attachment. There are a pair of buttons above each rear pocket. Waistband is lined with black polished cotton. All buttons are of black plastic. There are no maker's marks.

Pair of trousers worn by 433006 Flight Sergeant Alfred Joseph Jamieson during the Second World War. Jamieson was born on 11 July 1921 at Narrandra and was a resident of Queanbeyan, working as a shop assistant when he enlisted with the Army on 22 October 1941. He was a private with the serial number N243333. He was assigned to 3 Battalion AMF, and detached to Maroubra Force on 5 September 1942, seeing action on the Kokoda Trail. Jamieson contracted malaria and returned to Australia in late December 1942, disembarking at Sydney on 8 January 1943. He was discharged on 1 February 1943 (as he was 'required for the RAAF') and enlisted with the RAAF the following day. He trained in Canada with the Empire Air Training Scheme (EATS) as a wireless air gunner, completing courses in gunnery and wireless operation. Jamieson returned to Australia in 1945 to complete his service, rather than being sent to the European theatre, where there was already an abundance of aircrew. Jamieson was discharged at Ballarat on 12 November 1945.