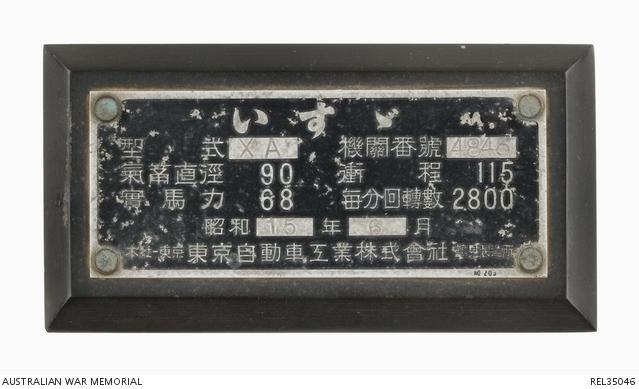 Japanese vehicle identification plate. The plate is rectangular in shape and has both Japanese and English characters stamped on its face. The plate reads: 'Isuzu Type XA Serial No. 4845 ? Diameter 90 Range 115 Horsepower 68 Revolutions per minute 2800 Date of manufacture June 1940 Tokyo Motor Car Company' . It has been attached to a black wooden base by the use of four screws. The plate is most likely to have come from an Imperial Japanese Army Isuzu TU10 Type 94 Truck; however it may also have come from an Isuzu/Sumida K10 Type 93 Command Car.

The Japanese firm Automobile Industries Co. Ltd, was established in March 1933 after the Ishikawajima Automotive Works merged with Dot Automobile Manufacturing Inc. The name Isuzu was first used in July 1934 to describe vehicles manufactured by Automobile Industries Co. Ltd. up to Ministry of Trade and Industry standards. The Automobile Industries Co. Ltd, was established as the Tokyo Automobile Industries Co, Ltd., the predecessor of Isuzu Motors Ltd. in April 1937 with capital of one million yen.
The Isuzu TU10 Type 94 truck first appeared in 1934 in response to the need for the Japanese Army to have tactical trucks, suitable for cross-country operation. They also became available for civilian users as a TU10 3-tonner under a subsidy scheme. The Type 94 truck had an XA 6-cycle side-valve liquid-cooled 4390-cc petrol engine with a maximum output of 70 brake horsepower at a rate of 2800 revolutions per minute. The truck shared most of its mechanical components with the Isuzu/Sumida K10 Command Car, which originated in 1933. It also had an XA 6-cycle side-valve 4390-cc petrol engine with a maximum output of 70 brake horsepower.
This identification plate was brought back from New Guinea by 62261 Leading Aircraftman George Calman. Calman was born at Copmanhurst, NSW, in 1907, and enlisted in the RAAF on 16 February 1942. He was then aged 34 and had worked for seventeen years as the manager of drycleaning at the David Jones department store in Surry Hills, Sydney. After initial training at Temora, NSW, Calman was mustered as an electrical fitter and underwent a year's training at a number of airforce technical schools before being posted to New Guinea with 79 Squadron RAAF, where he was a member of the ground crew servicing the squadron's Mark VC Spitfires. The squadron was first located at Goodenough Island, in May 1943, before moving to the Trobriand Islands in August , and then to Momote Island in March 1944. Calman returned to Australia in October 1944. Early in 1945 he requested an early discharge on the grounds that drycleaning professionals were now considered to be in a reserved occupation and were exempt from military service because of the important role they played in preserving the limited number of clothes available to the public because of fabric rationing. His request was denied and he was finally discharged on 5 November 1945.