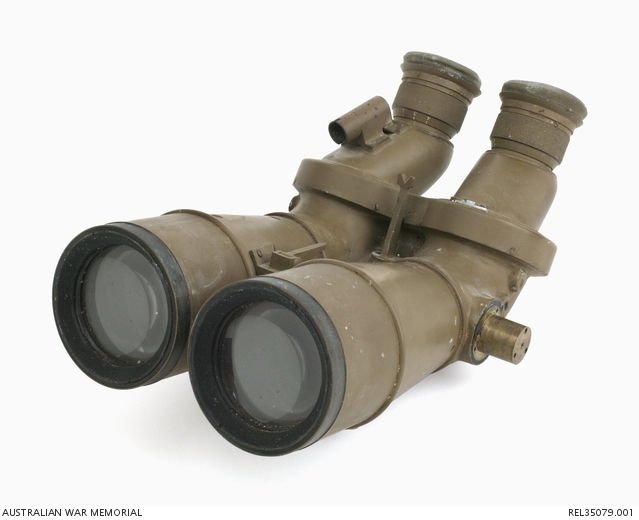 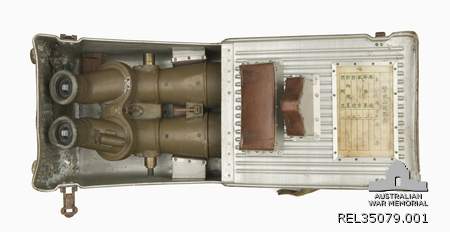 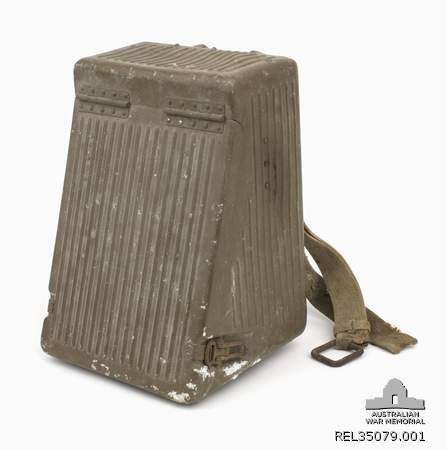 Set of brass bodied anti-aircraft binoculars in a khaki finish with 45 degree inclined oculars. Supplied with central flip-up needle sight, a pair of brass mounting flanges to the outer side of each ocular, and individually adjustable eyepieces with rubber pads. A fitting for a small electrical light is mounted to the proper right hand eyepiece The end of each ocular is fitted with a sliding cylindrical metal shade. The body is impressed in white between the eyepieces '10 x 6 degrees TOKO No 403 J.E.S.'

Related to the service of Andew Clifford Smith, born Ballarat 15 March 1915. Smith was living at Bunnaloo, NSW when he enlisted on 3 November 1939. After training he embarked for overseas service with 2/5 Battalion in Middle East. His skill and leadership qualities saw him rise through the ranks and he was a Lieutenant when he earned a Military Cross for 'great gallantry near Fort Merdjayoun' in Syria on 24 June 1941, where he was wounded. Upon his return to Australia, Major Smith was detached to command Headquarters, Mortar & Tank Attack Group, 1 Parachute Battalion. At war's end he visited Army Headquarters in Singapore where he was presented with this pair of cased Japanese binoculars. Smith was discharged from service on 13 April 1946. He reenlisted for service in the Korean War with 3 Battalion, Royal Australian Regiment, serving from 19 October 1951 until 2 March 1952. The binoculars are designed for use with anti-aircraft defence, employ a 6 degree field of view and are fitted for use with a stand or tripod. It is highly likely that they were employed in the wartime defence of Singapore. From 1944 to 1945 the United States Army Air Forces operating out of India bombed Japanese military targets on Singapore (in particular the docks and harbour area) several times with their massive B-29 Superfortress bombers.