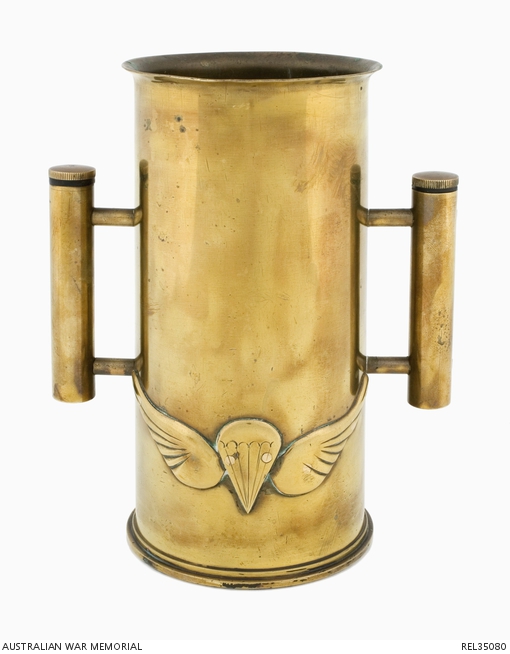 Brass 18 pounder Mk IV shell case dated 7/1940. The lower face is decorated with a brass version of the parachute badge, showing an open, winged parachute, which is flush rivetted to the body of the case. A pair of brass Lee Enfield .303 oil bottles have been adapted to form the handles and these are also rivetted to the body. Their screw tops are retained but the internal spades have been removed. Markings on the base of each bottle indicate one was made at Maribyrnong, Victoria (MA) and the other is a prewar version (star A). Markings on the base of the cartridge indicate a centre fire round manufactured at Footscray, Victoria (MF) in 1940, while the fuse markings indicate manufacture at Footscray, April 1940 and inspection at Maribyrnong in July 1940.

Related to the service of Andew Clifford Smith, born Ballarat 15 March 1915. Smith was living at Bunnaloo, NSW when he enlisted on 3 November 1939; after training he embarked for overseas service with 2/5 Battalion in Middle East. His skill and leadership qualities saw him rise through the ranks and he was a Lieutenant when he earned a Military Cross for 'great gallantry near Fort Merdjayoun' in Syria on 24 June 1941, where he was wounded. Upon his return to Australia, Major Smith was detached to command Headquarters, Mortar & Tank Attack Group, 1 Parachute Battalion, who presented him with this decorated shellcase (itself a relic from use in the MIddle East) at war's end; Smith was discharged from service on 13 April 1946. He re-enlisted for service in the Korean War with 3 Battalion, Royal Australian Regiment, serving from 19 October 1951 until 2 March 1952.