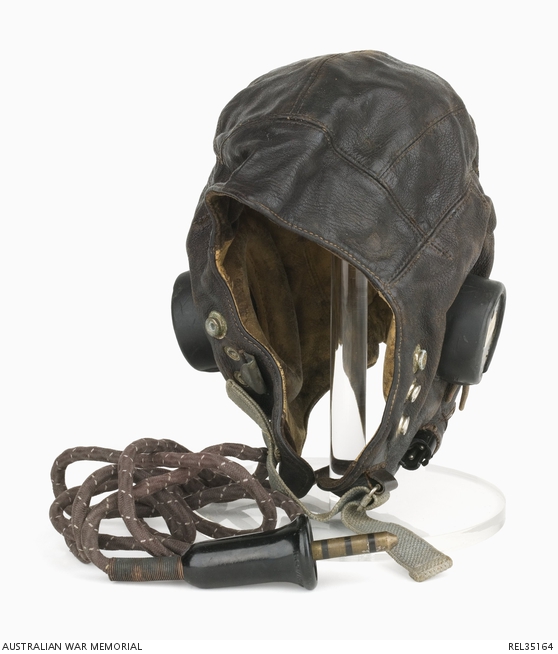 British issue brown leather Type 'C' model 22C/880 internally wired flying helmet complete with earphones, cord and plug. The helmet has a grey webbing chin strap with a press stud fastener, and black rubber cups protecting the external radio receivers. The receivers are marked in raised letters '10A/13466' below the letters 'A M' (Air Ministry) and the King's crown. Adjacent to the radio receivers on both sides are three chromed metal snap fasteners to receive the Type H oxygen mask; the right side is also equipped with a wide metal oxygen mask hook. The leather adjacent to the left chin strap is impressed 22C/880. At the rear of the helmet is a single buckle strap and four brown leather snap fastening tabs to secure the flying goggle straps and wiring loom. Below the left hand rubber cup is a integral socket to receive the microphone lead from the oxygen mask. Internally, the helmet is chamois lined and has chamois ear pads to reduce external noise. There is a brown velveteen sweat absorbing panel at the brow. Loom wires emerge from the rear of the helmet and combine to form a 1.4 m long insulated cable which ends in a large brown bakelite plug with the reference number 10H/0991. A small, free floating square of leather equipped with a snap fastener is mounted on the cable; the fastener can be attached to the corresponding snap just below the communications plug.

Related to the service of 032564 Flight Lieutenant Bernard John Reynolds, born Goondiwindi, Queensland on 6 March 1931. This helmet would have been used in Reynolds' early career during training, when flying Mustangs and Wirraways.

Reynolds graduated from No 2 Course, RAAF Point Cook December 1952 after training on Wirraways. Assigned to 22 (Mustang) Squadron, Schofields, NSW, he converted to Mustang and Vampires at No 2 Operational Training Unit (2 OTU), Williamtown in the following year.

In July 1953 Reynolds transferred to 2 Squadron, Amberley, flying Lincolns and acted as co-pilot on one of three Lincolns tasked with flying through the atomic cloud generated by the British nuclear test at Emu Field, South Australia on 15 October 1953.

With the rank of Flying Officer, he was transferred to RAAF Tengah at Singapore and spent 1954 and 1955 flying Lincolns operationally with 1 and 6 Squadrons on missions in Malaya during the Emergency. Reynolds returned to Australia in 1956, attending a Flying Instructors Course on Wirraway, Vampire and Winjeels and, promoted to Flight Lieutenant, served as a jet instructor on Vampire aircraft in 1957-58 at Central Flying School (East Sale).

After serving as personal aide to Air Marshall Sir Frederick Scherger from 1959-60, Reynolds converted to the CAC CA-27 Sabre in 1961 and was appointed Flight Commander of 76 Squadron, Williamtown in 1962, a position he held until 1963. During the same period, he was leader of 76 Squadron's Red Diamonds Aerobatic Team, flying Sabres.

Towards the end of 1963, Flight Lieutenant Reynolds was transferred to Perrin Air Force Base, Texas, USA on an exchange posting flying F102A Delta Daggers and the T33A Thunderbird trainer, the latter aircraft used by the Americans for aerobatic flying.

Having served as Honorary ADC to two Govenors- General (Kerr and Cowen), and reached the rank of Air Vice Marshall, Reynolds retired from the RAAF in November 1985. He died just four months later, on 10 February 1986, of cancer.