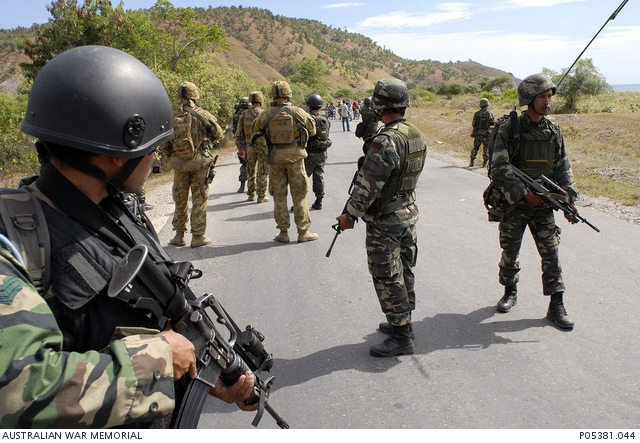 International peacekeepers, including Australian and Malaysian troops, prepare to briefly stop approximately 2000 protesters at a military roadblock before escorting them to Dili. The soldier on the left is armed with a Colt M4 carbine, while the soldier on the right is carrying a Steyr F88 assault rifle. The protestors later arrived in Dili in trucks, buses and on motorbikes and shouted 'bring down Alkatiri' (Prime Minister Mari Alkatiri), and voiced support for President Xanana Gusmao. President Gusmao then asked them to return to their own places and end the violence. Civil unrest followed initially peaceful protests against the government, and continuing violence, looting and arson have disrupted Dili. An Australian-led international peacekeeping mission is attempting to restore calm and stability to the Democratic Republic of Timor Leste. Approximately 2500 Australian Defence Force (ADF) personnel, led by Brigadier Michael Slater, have been deployed on Operation Astute. The first elements of the force arrived the day after the request for assistance was received from the government of Timor-Leste.