Woman praying at a Shrine 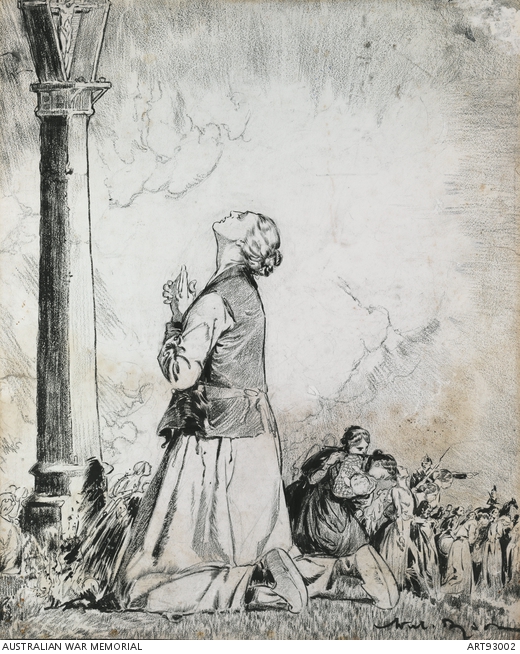 Depicts a young French woman, wearing a waist coat and clogs (sabots) in the foreground kneeling before a shrine, with her head upturned and praying. At the top of the shrine is a small crucifix, a common sight in France during the First World War. Behind her are other women, carrying bundles and babies and running or being rounded up and moved away by a number of German soldiers. The work relates to the German policy, in April 1916, of deporting men and women from German-occupied Lille in France to other districts to provide forced labour, during the First World War. The French Prime Minister during the time, Aristide Briand, provided an official statement on this event in which noted; 'By order of General von Graevenitz, and with the support of Infantry Regiment No. 64...about 25,000 French - consisting of girls between 16 and 20 years of age, young women, and men up to the age of 55- without regard to social position, were torn from their homes at Roubaix, Tourcoing and Lille, separated ruthlessly from their families, and compelled to do agricultural work in the Departments of the Aisne and the Ardennes...this new outrage committed by the Imperial German government...they have taken women and girls away from their families; they have sent them off...a General and a large force arrived at Lille [and] on April 19th and 20th, the public were warned by proclamation to be prepared for a compulsory evacuation...methodical raids began at Lille in the Fives quarter...the victims of this brutal act displayed the greatest courage.... they were heard crying 'Vive la France' and singing the Marseillaise in the cattle-trucks in which they were carried off...The women are employed in cooking and laundry-work for the [German] soldiers and as substitutes for officers' servants...for this severe work, housemaids, domestic servants and factory women have been taken by preference...In orders placarded at Lille the German military authority has endeavoured to justify the wholesale deportations ordered at Lille and Roubaix as a retaliation for the attitude of England in making the provisioning of the population increasingly difficult...these unhappy people had to present themselves for the work imposed on them by night or by day, at all sorts of places and at great distances from their homes...in most cases without any kind of remuneration, in others for a few crusts of bread...[they] have reduced the unfortunate population of invaded districts to a condition which can be likened only to slavery'. Will Dyson was the first Australian official war artist to visit the front during the First World War, travelling to France in December 1916, remaining there until May 1917, making records of the Australian involvement in the war. He was formally appointed as an official war artist, attached to the AIF, in May 1917, working in France and London throughout the war. His commission was terminated in March 1920.