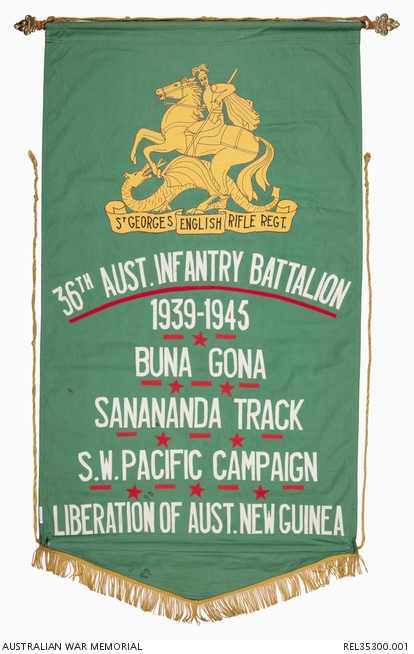 Green cotton cesarine marching banner with applique lettering and decoration. At the top is the mounted figure of St George killing the dragon above a scroll embroidered in black 'ST GEORGES ENGLISH RIFLE REGT.' The figure, animals and scroll are edged and detailed in black. Underneath St George, in large white applique letters are ' 36TH AUST. INFANTRY BATTALION/ 1939-1945/ BUNA GONA/ SANANANDA TRACK/ S.W. PACIFIC CAMPAIGN/ LIBERATION OF AUST. NEW GUINEA'. The rows of words are separated by applique horizontal red stripes and five-pointed stars. Gold cotton cords are attached to the top and bottom of the banner so that it can be attached to a pole. The triangular lower edge of the banner is edged with a gold cotton fringe.

After the First World War the defence of the Australian mainland lay with the part-time soldiers of the Citizens Military Force or Militia. The 36th Battalion (Bn) was formed as a militia unit at Ashfield, Sydney in 1921 and drew its members from the neighbouring suburbs. In 1927 it was officially recognised as evolving from ‘St Georges English Rifle Regiment’, formed in 1896, and inherited the battle honours of that unit in the Boer War, and of the 36th Battalion, AIF. The battalion spent 1940 and 1941 in a variety of training camps in New South Wales. Following Japan’s entry into the war 36 Bn moved to the coast to defend Newcastle in March 1942 but was soon transferred to Townsville and then Port Moresby, in May 1942. The battalion served in New Guinea and New Britain until June 1945, under the command of Lieutenant Colonel Oscar ‘Ike’ Isaachsen, with only a short break back in Australia between March and July 1943. In Moresby the battalion carried out garrison duties, later conducting long-range patrols in the Owen Stanley Range. With the Japanese fighting across the Kokoda Trail, the battalion moved to Koitaki September 1942. The Japanese had reached Nauro, from where a track ran south to Subitana, connected by road to Moresby. It was feared they would take this road and 36 Bn was sent to block any attempt. The battalion patrolled the area for about a week, before it was sent further up the track to Uberi, where they relieved the remnants of the 2/14th and 2/16th Battalions. 36 Bn returned to Port Moresby on 9 October for a few months. Meanwhile Australian forces continued to push the Japanese back along the Kokoda Trail, Buna and Gona were captured and the Australians next attacked Sanananda. The first attack made little headway. Consequently 36 Bn joined the assault. The 49th and 55th/53rd Battalions made an unsuccessful attack on Sanananda on 7 December, before 36 Bn arrived in the area. During an attack on 19 December 36 Bn contained the Japanese front, but again the attack failed and fighting continued for days. On 26 December 36 Bn took part in another attack on Sanananda but, after several days of fierce fighting, the Australians still could not capture the Japanese positions. Sanananda was not completely captured and cleared until 21 January 1943, by which time the battalion had been transferred. By the end of the fighting at Sanananda the battalion had been halved due to casualties. At the start of January 1943 the battalion moved to the Gona area to patrol the Gona-Amboga River area. In March 1943 they returned to Australia and, after a short period of leave and training in northern Australia, returned to New Guinea in July. For the next 15 months 36 Bn was stationed in Port Moresby, Soputa, Buna-Oro Bay, Lae, Wau, and Bulolo. In October 1944 the battalion moved to the north coast of New Britain, later joined by the 14th/32nd and 19th Battalions. Rather than carry out a major offensive against the Japanese at Rabaul, the much smaller Australian force confined the Japanese to the Gazelle Peninsula with active patrolling. For the next seven months 36 Bn made a name for itself with long-range patrols and numerous amphibious landings, becoming known as 'Ike’s Marines'. In June 1945 the battalion was relieved and brought back to Australia. Its final parade was on 27 August and the battalion was disbanded shortly afterwards. This Anzac Day marching banner was made in 1951, incorporating the battle honours for the Second World War that had been approved and awarded. After 1960 it was carried together with REL35300.002 the ‘Ike’s Marines’ banner until 2005, when 36 Battalion Association disbanded.