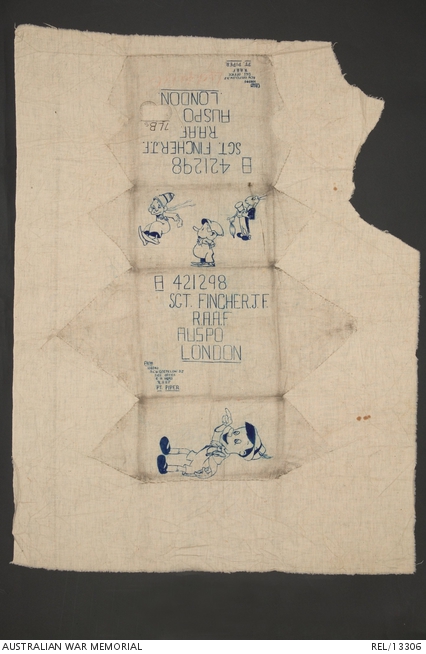 Calico cloth used for wrapping and posting a Christmas cake. The cake was wrapped into a rectangular shape and the address marked on both sides. The remaining surfaces of the cloth are decorated in blue ink with popular cartoon characters Pinocchio, Jiminy Cricket and two of the seven Dwarves. The address reads in large lettering 'A 421298 SGT. FINCHER. J.F. R.A.A.F. AUSPO LONDON'. Below this in smaller writing is 'FROM 108340 A.C.W. GOSTELOW D.J. SIGS. OFFICE E.A. HQRS R.A.A.F. PT. PIPER.'. One of the addresses has been stamped with a post mark and is annotated in black ink with '7LBs'.

This cloth was decorated by 108340 Aircraftwoman Dorothy Joan Gostelow and used to wrap a homemade Christmas cake. She sent it to 421298 Warrant Officer John Farram Fincher who was serving in London at the time.

Both Gostelow and Fincher were from Scone in NSW. She was born in November 1924 and enlisted in the Women's Auxialiary Australian Air Force (WAAAF) on 17 December 1942.

When she sent the cake to her friend in London she was at Eastern Headquarters at Point Piper, Sydney, working in the Signals Office. Her last unit before her discharge on 19 October 1945 is listed as 5 Aircraft Depot.

John Fincher was born in Scone in June 1923 and enlisted in the Royal Australian Air Force (RAAF) on 31 January 1942. His last unit is recorded as 626 Squadron and he was discharged on 1 October 1945.

They married at Scone in December 1946.