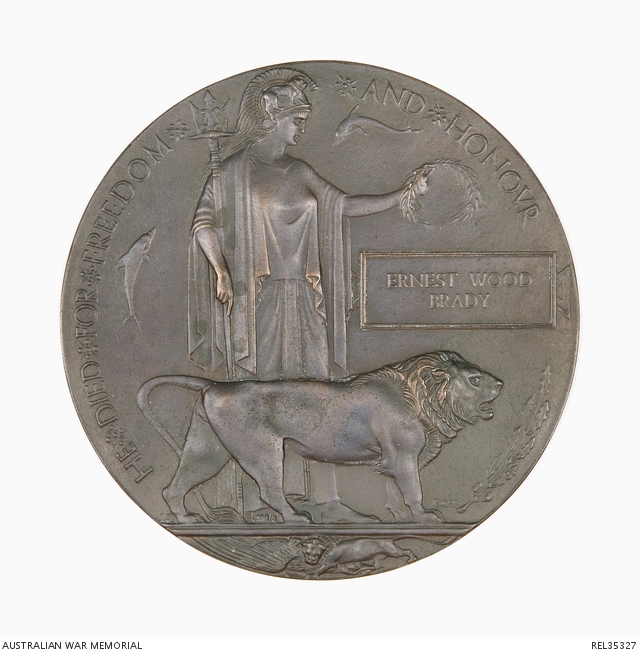 Bronze Next of Kin Plaque with an image of Britannia and a lion together with the words 'HE DIED FOR FREEDOM AND HONOUR'. The name of the dead soldier 'ERNEST WOOD BRADY' is recorded in raised letters within a raised rectangle.

This next of kin plaque is associated with 2105 Corporal Ernest Wood Brady, of 28 Battalion, AIF. Brady was born at Burra Burra, South Australia, in 1895 and was working as a locomotive fireman in Western Australia before enlisting in the AIF in June 1915. He had previously had military experience while serving in the Militia with 86 Infantry Regiment (The Western Australian Rifles). Brady embarked with the 4th reinforcements to 28 Battalion aboard HMAT Hororata on 1 October. He served with his unit until 3 March 1917, when he died of wounds received from shellfire at Warlencourt, on the Somme. He is buried at Dernancourt Communal Cemetery Extension. Four of Brady's brothers also enlisted in the AIF, and one, 709 Trooper Edgar Vernon Brady of 10 Australian Light Horse Regiment, was killed in action at Gallipoli, in the charge at the Nek on 7 August 1915.