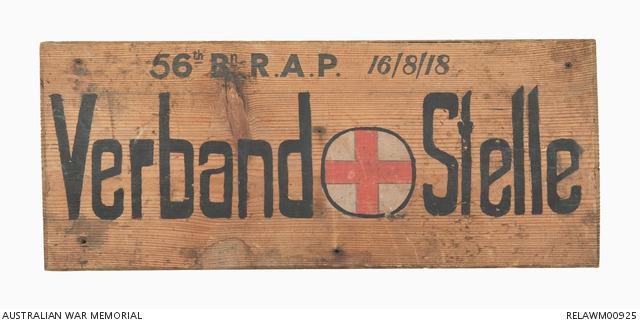 Raw timber sign board, made from a section of wood cut from a single plank. The sign has the words 'Verband Stelle' [dressing post], painted in black, separated by a white circle, with a black border, containing a red cross. Above this in black letters are the words '56th Bn R.A.P. 16/8/18'. On the back of the sign in pencil are written the words; 'Australian War Museum 56th Battalion AIF 14th Aust Inf Bd 20.8.18. Board found on dugout used as RAP by 56 Batt. AIF at La Flaque near PROYART'.

The 56th Battalion was raised in Egypt on 14 February 1916 as part of the 'doubling' of the AIF. Half of its recruits were Gallipoli veterans from the 4th Battalion, and the other half, fresh reinforcements from Australia. The battalion became part of the 14th Brigade of the 5th Australian Division.

Arriving in France on 30 June 1916, the battalion entered the frontline trenches for the first time on 12 July and fought its first major battle at Fromelles a week later. The battle was a disaster, resulting in heavy casualties across the division. Despite these losses the 5th Division continued to man the front in the Fromelles sector for a further two months.

In early 1917 the 56th Battalion participated in the advance that followed the German retreat to the Hindenburg Line. It was spared the assault but did, however, defend gains made during the second battle of Bullecourt. Later in the year, the AIF's focus of operations switched to the Ypres sector in Belgium. The 56th's major battle here was at Polygon Wood on 26 September.

With the collapse of Russia in October 1917, a major German occured on the Western Front in late March and the 5th Division moved to defend the sector around Corbie. The 14th Brigade, took up positions to the north of Villers-Bretonneux and held these even when the village fell, threatening their flanks.

After the German offensive was defeated, the Allies launched their own offensive on 8 August 1918. The 14th Brigade did not play a major role in these operations until late in the month, but its actions were critical to the capture of Péronne, which fell on 2 September. The 56th fought its last major battle of the war, St Quentin Canal, between 29 September and 2 October 1918. It was resting out of the line when the Armistice was declared on 11 November. Soon after, members of the battalion began to be returned to Australia for discharge.

This sign originally marked the site of a German dressing station at the small village of La Flaque, between Proyart and Framerville, (the words 'Verband Stelle' translate literally as 'bandaging post' or 'dressing post'). From 16 August it was utilised by 56 Australian Infantry Battalion to mark their Regimental Aid Post (RAP).