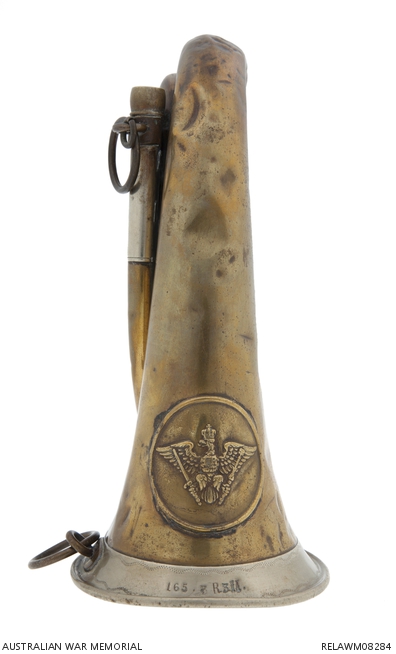 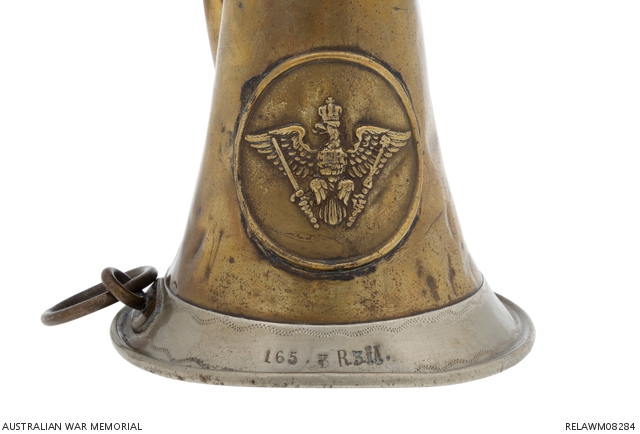 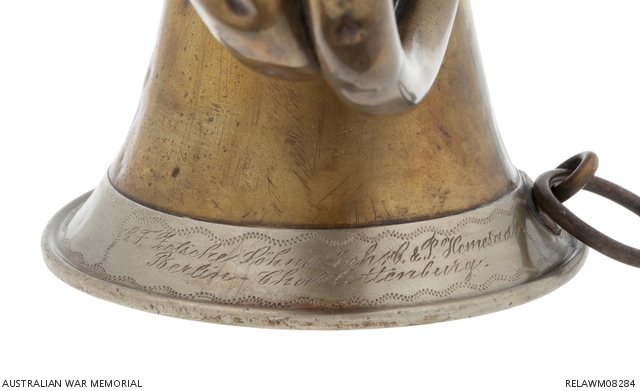 Brass bugle with nickel plated brass edging to bell and bindings around stem. The mouthpiece is missing. A large brass ring is attached to the outside of the bell, and another is attached below the mouthpiece, to carry a suspension strap or cord. An embossed brass oval, bearing a crowned German eagle is attached to the top of the bell. The nickel plated binding on the bell has engraved decorative edges. Impressed into the upper side is '165 R3II'. The lower side is engraved with the manufacturer's details, 'C.F. Fetsche Sohne Fnk C. de P. Hemesatt Berlin - Charlottenburg'.

Associated with the service of 104 Bugler Valentine Flemming, a nineteen year old motor driver who enlisted in the Australian Naval and Military Expeditionary Force (ANMEF) sent to capture the German colonies in New Guinea after the outbreak of the First World War, on 12 August 1914.

He was assigned to A Company, 1 Tropical Battalion and sailed for New Britain on HMAT Berrima on 19 August. During his service at Rabaul and Herbertshohe, Flemming took posession of this bugle. He returned to Australia and was discharged on 4 March 1915. He left the bugle with his mother Julia while he was at home in Sydney.

Nine days later he re-enlisted for service in the AIF and was allocated the service number 2262. Flemming was assigned, again as a bugler, to the 6th reinforcements for 4 Battalion and embarked for Egypt aboard HMAT A63 Karoola on 16 June.

After arrival there he was almost immediately sent to join his battalion at Gallipoli, arriving there on 4 August. He was killed soon afterwards during the Lone Pine offensive, between 6 and 9 August. Witnesses later said that he had been killed outright by a single shot, probably on 7 August, while in the second line of trenches to be captured from the Turks.

He has no known grave and is commemorated on the Lone Pine Memorial. Two of Flemming's brothers also served at Gallipoli. Sixteen year old Private Geoffrey Lionel Flemming was killed on 16 June 1915 while serving with 2 Battalion, AIF.

The oldest of the brothers, Second Lieutenant Richard Alfred Flemming was wounded in the back at McLaurin's Hill on 13 May while serving with 4 Battalion. He eventually recovered but was repatriated to Australia in October 1915. He saw no further active service but later served as a sea transport officer.

Val Flemming's mother, Julia, donated this bugle and the accompanying drum (see RELAWM08283) to the Australian War Memorial in the name of her son, on 23 December 1925.