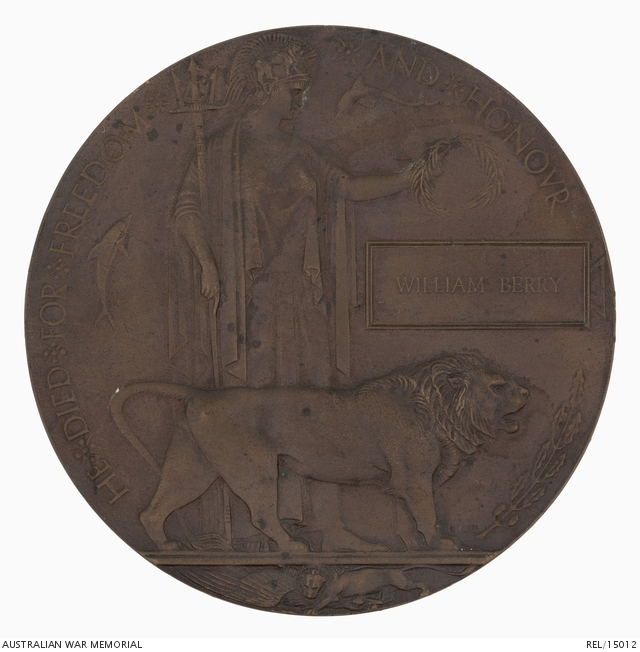 Bronze next of kin plaque, showing on the obverse, Britannia holding a laurel wreath, the British lion, dolphins, a spray of oak leaves and the words 'HE DIED FOR FREEDOM AND HONOUR' around the edge. Beneath the main figures, the British lion defeats the German eagle. The initials 'ECP', for the designer Edward Carter Preston appear above the lion's right forepaw. A raised rectangle above the lion's head bears the name 'WILLIAM BERRY'.

Born in Fiji in 1894, William Berry arrived Australia with his parents a few years later, initially settling in New South Wales, where his sister, Ethel, was born at Casino in 1887, before moving to Dalby in Queensland. Berry was largely educated at Scotch College in Melbourne, where his uncle was the Principal, but completed the last two years of his education at Toowoomba Grammar School, before attending the Hawkesbury Agricultural College in New South Wales. His father died in December 1909, followed by his infant sister Ivy, in January 1910. His mother remarried in 1914.

Berry was working as a farmer at Dalby when war was declared in 1914. He appears to have made two attempts to enlist in the AIF - each time being rejected because of his slight physique - before being accepted on 6 September 1915. Even then he weighed only 40.3 kilograms. After initial training he was posted a private, service number 4437, to the 14th Reinforcements to the 15th Battalion. The unit left Brisbane on 31 January 1916, aboard HMAT A62 Wandilla.

Berry arrived in Egypt on 7 March. Less than a month later, on 1 April, he transferred to the newly raised 47th Battalion. The unit arrived in France on 9 June. The battalion entered the front line at Pozieres, its first major battle, on 7 August, when it relieved the 48th Battalion. It remained in the line for four days, suffering heavy casualties. William Berry, by now one of the battalion's scouts, was killed on 7 August. Although he is known to have been buried at the time, constant fighting over the same area meant that his body could not be located for interment in a war cemetery aftter hostilities had ended. His name is recorded on the Villers-Bretonneux Memorial.

This commemorative plaque was sent to his mother, Ethel May Caterer, in March 1923.