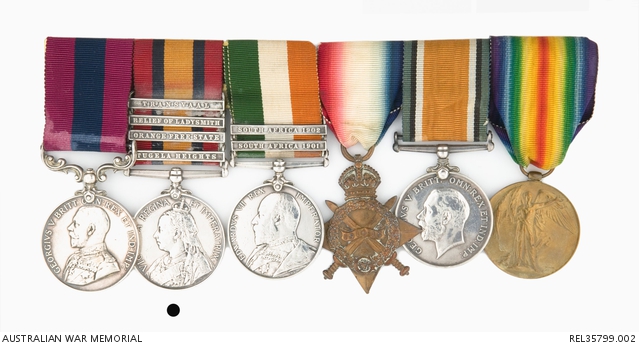 Queen's South Africa Medal with four clasps, 'TRANSVAAL', 'RELIEF OF LADYSMITH', ORANGE FREE STATE', TUGELA HEIGHTS'. Engraved around edge with recipient's details. The reverse of the medal has the ghost dates '1899-1900' visible under the wreath held by Britannia.

Associated with the service of Francis Viney, who was born in Ringwood, Hampshire, England in 1880, son of William and Alice Viney. He worked as a labourer, before enlisting in the Dorsetshire Regiment on 13 June 1898 at the age of 18. His service number was 5727. Viney served briefly on Malta before being sent to South Africa where he served for over three years. During the Boer War he fought in the Transvaal and the Orange River Colony and was involved with the relief of Ladysmith in 1900. The Boers has surrounded Ladysmith and besieged the British for 118 days. The first British relief attempt was defeated by the Boers at the Battle of Colenso, near the Tugela River on 15 December 1899. Viney took part in the subsequent Battle of Tugela Heights, a name used for a series of smaller battles, fought between 12 and 27 February, a short distance from Colenso, towards Ladysmith in an attempt to relieve the besieged town. Ladysmith was relieved by the second attempt, on 28 February 1900. Viney transferred from the permanent forces into the Army Reserve on 23 February 1905. In 1913 he immigrated to Australia. On 28 July 1915 Viney enlisted into the Australian Imperial Force at Liverpool. He was nearly 36, was married to Daisy Chandler Viney and was working as a saw mill hand. He embarked from Sydney on 2 November 1915 for Egypt aboard HMAT Euripides with the 11th reinforcements to 2 Battalion. In Egypt he was taken on strength of the newly formed 53 Battalion in February 1916 but a month later transferred to 25 Howitzer Brigade, 5 Division Artillery. Viney was promoted to bombardier in May 1916. On 19 June he left Egypt for service in France. On 7 July he transferred to 115 Battery and in August 1916 was promoted to corporal. On 28 December he was admitted to the 104 Field Ambulance in France with a gun shot wound to the head. In April 1917 Viney was transferred to 3 Field Artillery Brigade. He was again wounded, in October 1917 in Belgium, receiving shrapnel wounds to his right arm and shoulder. In November he rejoined his unit. In April 1918 he was awarded the Distinguished Conduct Medal for his actions at Westhoek, Belgium on 3 December 1917. In late July 1918 Viney was transferred to hospital England with trench fever and diarrhoea. He returned to Australia on HMAT Orontes and was discharged on 19 March 1919. Francis Viney died in 1970.