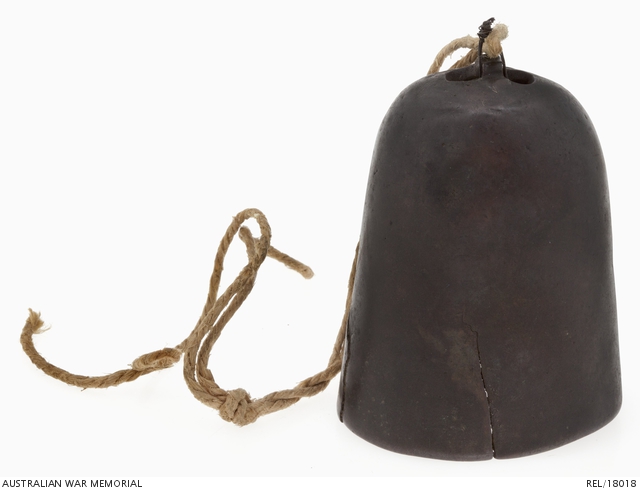 Cast brass domed goat bell with three holes drilled into the dome head. Through two of these holes is wired a fired rifle round, which acts as a clapper - a length of string is attached to the wire and the bell suspends from this. There are two longitudinal splits rising from the bell skirt but, despite this, the bell retains a clear sound.

Goat bell relating to the service of 17 Sergeant Fred Rupert Aspinall, born 1894 at Melbourne, a glazier who enlisted on 19 August 1914 at Broadmeadows, Victoria. Given his previous signalling experience with the militia (60th Infantry Signal Engineers), Aspinall was assigned to 1 Signalling Troop as a sapper. He embarked from Australia on 21 October 1914 for Egypt, being landed at Gallipoli on 9 May.

In a letter to his fiancée, Grace Freeland, which accompanied this goat bell when he posted it home in April 1916, Aspinall wrote that he found the bell 'on Gallipoli Peninsula in Canterbury Gully, and was used from the day I found it, to the day I left, in the Signal Office, for the men on duty to get messages from HQ.' Possibly overinflating the bell's importance, he added 'look after it for all you are worth - I was offered plenty of money for it but refused everything, so don't you sell it!' Canterbury Gully was also known as Rest Gully.

Sapper Aspinall's Gallipoli service included the expected bout of illness due to exposure or poor diet and he spent about 6 weeks in hospital at Malta before rejoining his unit on 19 October. He was promoted to Lance Corporal on 3 December before the main evacuation; and Corporal on 22 May 1916, at Romani. Three days later, he was posted to 1 Signal Squadron, ANZAC Mounted Division, which was formed in March from personnel drawn from members of 1,2 and 3 Signal Troop and 12 Australian Army Service Corps.

On 16 February 1917, Aspinall was promoted to Sergeant; on 28 May he was transferred to Base Signals Depot at Alexandria, rejoining his unit on 15 July. His work was recognised in General Sir A J Murray's despatches of 28 June 1917, published London Gazette 14 January 1918, second supplement 30474; the final month of the war he spent in hospital at Abbassia with malaria. Embarked for RTA from Suez aboard 'Port Darwin' on 15 November on 1914 leave, arriving Melbourne Christmas Eve and being discharged 22 February 1919.