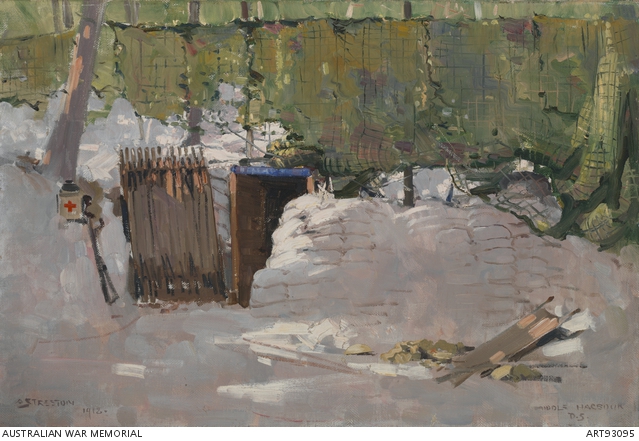 Depicts the entrance to the Advanced Dressing Station at Middle Harbour, France, with a wall protected by sandbags and hessian camouflage screening above, set into the slope of hill. A red cross pack and rows of canvas stretchers are stacked near the entrance, while another stretcher is propped against the sandbag wall in the right foreground. The location is described on a sticker on the back on the canvas: Smiths Farm, near Corbie.
The work is sun-dappled and devoid of the frenetic activity that usually accompanies scenes at dressing stations. This is consistent with many of Streeton's depictions of the battlegrounds of France, which use abandoned weaponry, broken buildings and distant explosions - rather than people - to map the landscape of war. In a letter from the Front he remarked that battlefields were very quiet looking things, because most of the action was hidden by camouflage. Curiously he did not depict interior, action-packed scenes of dressing stations, even though he would be intimately aware of the suffering that took place in them following his time as an orderly in a London hospital.
Dr Jacqueline Strecker, who evaluated the painting on behalf of the War Memorial observed that:
"The experience of war is strongly suggested through the empty stretcher (on top of perhaps a hurriedly discarded uniform and helmet) and through the rather haphazard architecture of this temporary field hospital. Streeton's interest in the abstract patterns and colours of the landscape - in particular the camouflage netting - is highly resolved in this work as is his use of expressionistic techniques to render the subtle effects of light on the landscape such as the thick white brushstrokes dramatically set against the thinly applied blended pastel tones in the foreground. In summary, this is a rare, high-quality painting in excellent condition and would complement related works in the Australian War Memorial's distinguished collection of works by Arthur Streeton."
The Advanced Dressing Stations were mobile units which administered urgent medical care to the wounded. Pain relief, bandaging and even emergency amputations were supplied, before they were sent on to a Casualty Clearing Station that was usually located a few miles from the front.