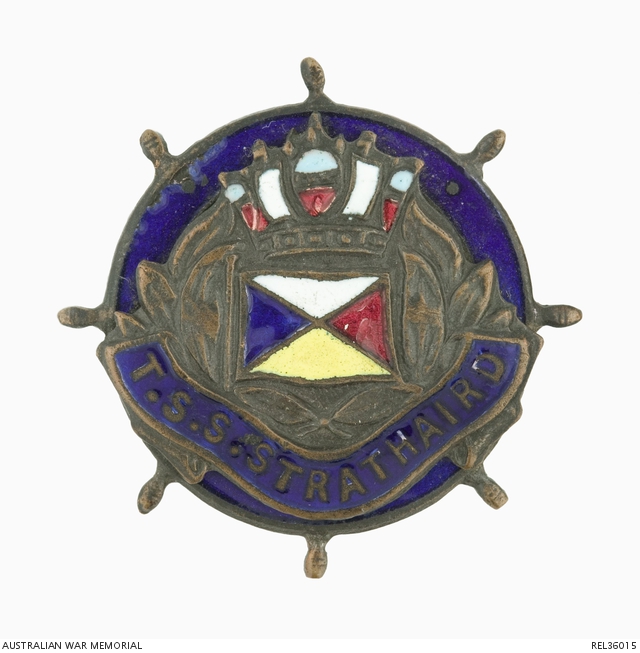 TSS Strathaird badge souvenir badge. The background shows a ship's wheel with blue enamel. The foreground is made up of an enamelled P&O house flag divided into four triangular sections - white (top), yellow (bottom), red (left) and blue (right). Above the flag is an enamelled naval crown. The flag is surrounded by a wreath. Below the wreath is a blue enamelled scroll with 'T.S.S. STRATHAIRD'.

Badge collected by NX93640 Craftsman Thomas Sydney Turner. RMS Strathaird (later TSS, then SS Strathaird) was built by Vickers-Armstrong Ltd at Barrow-in-Furness, England. Strathaird was launched on 18 July 1931, and completed on 10 January 1932. One of the ships of the P&O Line, RMS Strathaird left Tilbury on her maiden voyage on 12 February 1932, bound for Sydney, Australia. In September 1939 Strathaird was requisitioned as a troop carrier and during her service transported troops from Australia to the Middle East, as well as rescuing civilians and troops from Brest in France. Strathaird was handed back to P&O at the end of 1946. This badge would have been sold in the ship's shop as a souvenir for passengers.