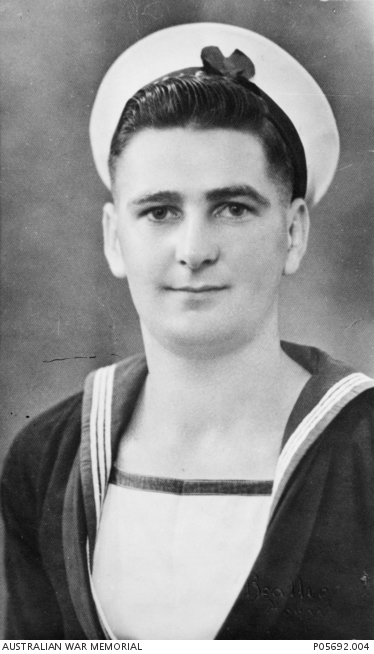 Studio portrait of H/1016 Able Seaman (AB) Trevor William Chipman, of Rokeby, Tas, age 19. AB Chipman was a gunner on the RAN Boom Defence Vessel HMAS Kangaroo A291 when Darwin suffered its first air raid by carrier based aircraft of the Imperial Japanese Navy on 19 February 1942. He fired 132 shots at Japanese aircraft which dropped bombs on the United States Navy destroyer USS Peary. The Peary caught fire and sank in Darwin Harbour. HMAS Kangaroo, commissioned at Sydney on 27 September 1940, had arrived at Darwin on 13 January 1941. She participated in boom defence service alongside her sister ships HMAS Karangi A304 and HMAS Koala A315, and Net Class Boom Defence Vessel, HMAS Kookaburra A331. During the air raid on 19 February 1942 Kangaroo suffered damage and one fatal casualty. She was in a dockyard at Brisbane for damage repair from 1 April to 20 May 1942, returning to Darwin to resume boom defence duty on 5 June 1942. With the exception of a voyage to Timor for the surrender ceremony in September 1945 she remained in service in the Darwin area until the end of 1945.