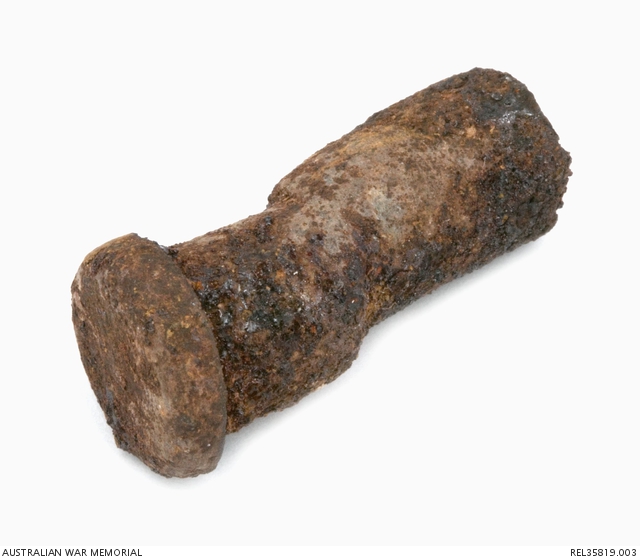 Ferrous pin, sheared at one end and distorted along its length. Extensive corrosion.

Related to the service of Donald Deviney King, born 11 January 1923 at Toowoomba, Queensland. King enlisted in the RAN on 21 January 1942 and was assigned the service number B3460 and the rank of Ordinary Seaman. After training in Melbourne he was posted to Garden Island, arriving on the afternoon of 31 May 1942. For his sleeping quarters, he was assigned to the converted Sydney Harbour ferry HMAS Kuttabul, and while settling in, swapped his lower bunk with another new recruit for an upper one. Later that night, HMAS Kuttabul received a torpedo hit during the Japanese midget submarine attack on Sydney Harbour and sank at its moorings. His wife Pamela continues: ‘Don was injured by a splinter of the wharf pier as he was pulled from the water by two other ratings. He was given a brandy, blanket and pillow with a stretcher and sent to hospital for two days and then assigned to the pumps and equipment to assist the diving party whose task it was to retrieve the remains of those who were lost.’ Among those who died was the young man with whom he had swapped his bunk. This object is one of four that King souvenired while assisting in the recovery, and includes the wood splinter which injured him when he was pulled from the water. His family believe that after the war he visited the family of the man with whom he swapped his bunk. While King continued serving in the Royal Australian Navy, serving with corvettes, including HMAS Junee and reaching the rank of sub-lieutenant, his experience on the Kuttabul affected him deeply for the rest of his life. Sub-lieutenant King was discharged on 3 May 1946.