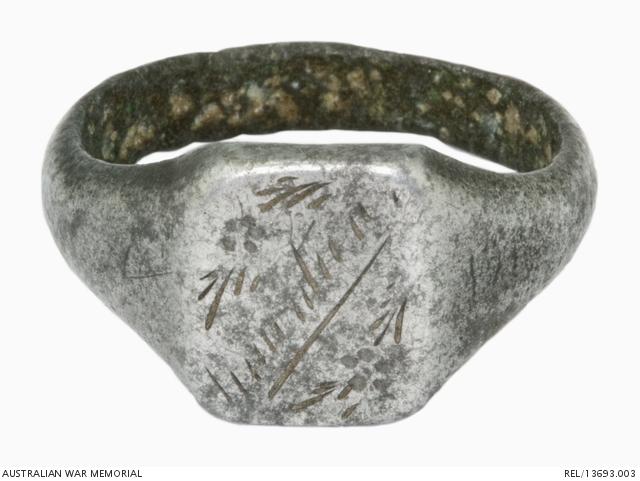 Aluminium signet ring with a rectangular face. The face has been engraved diagonally across the front but the word is no longer legible.

This ring is thought to have been made by 107 Driver William Francis Teague, born in Sydney on 30 June 1889, a married printing journeyman and motor mechanic from Leichhardt, NSW. He enlisted on 18 April 1915 and was assigned to B Company, 18 Battalion, AIF. Teague embarked for overseas service aboard HMAT Ceramic from Sydney on 25 June 1915. He saw limited service on Gallipoli before serving in France with both 18 Battalion and 2 Division Headquarters Motor Transport. He returned to Australia on 27 April 1919. A cottage industry developed in the trenches during the war, making souvenir aluminium rings. Aluminium rings were made from melted down fuses from German shells, or from melted down aluminium mess kits and canteens. Collecting the fuses from unexploded ‘duds’ could often be dangerous and many men were wounded attempting to salvage this material. The aluminium would be melted, then roughly cast and filed down, and then either be engraved, or have an item, such as the front of a button, attached to the face of the ring.