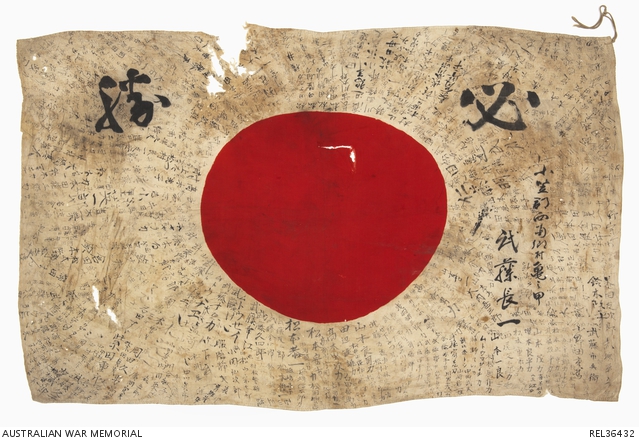 Printed rayon Japanese national flag bearing two large characters across the top expressing the wish for 'inevitable victory'. Two rows of large characters running down the right side give the name of the soldier to whom the flag was presented, Muto Nagaichi, and his address, the village of Kame no Ko (turtle shell) in the Ogasa-gun district. The rest of the flag is covered in small signatures, apparently from inhabitants of the village. These include a number of people with the surname Muto, including women, who are presumed to have been Nagaichi's family and relatives.

This flag was collected by NX18200 Gunner Donald Douglas, of 2/9 Light Anti Aircraft Battery, while he was serving near Labuan, Borneo, in 1945. Australian troops had a Japanese force pinned at one end of a small valley but each night some of the them managed to pass through the Australian lines by using their outstanding jungle skills. Douglas's unit tried booby trapping the track that was being used by tying a grenade to a substantial bush and setting the pin very lightly with string but had almost no success with this method. One night a group of nearly 50 Japanese managed to get past the battery towards an Australian engineer's camp further down the valley and a machine gun battle broke out as the men were trapped between the two Australian units. Douglas was sent back to man a Bren gun and during the ensuing fight killed a Japanese sniper, Muto Nagaichi. Once the situation became safe Douglas took the flag from Muto's body as a souvenir. The Japanese soldier had been wearing it folded up under his helmet. Donald Douglas was born in Liverpool, England, in 1919. He was working as a storeman at Wollongong, NSW, when he enlisted in the Second AIF on 9 April 1940, and had already seen previous service in the militia, with 34 Battalion. Douglas served as a gunner, qualified as a Group III Gunlayer, with 3 Australian Light Anti Aircraft Battery, 2/3 Australian Anti Aircraft Regiment and with 2/9 Light Anti Aircraft Battery. He served in North Africa and the Middle East between 28 June 1941 and 16 March 1942, and in New Guinea, including service at Milne Bay and Lae, between 12 June 1942 and 28 May 1944. In April 1945 his unit was posted to the Netherlands East Indies and Borneo, where he remained until 16 September 1945. Douglas was discharged on 30 October 1945.