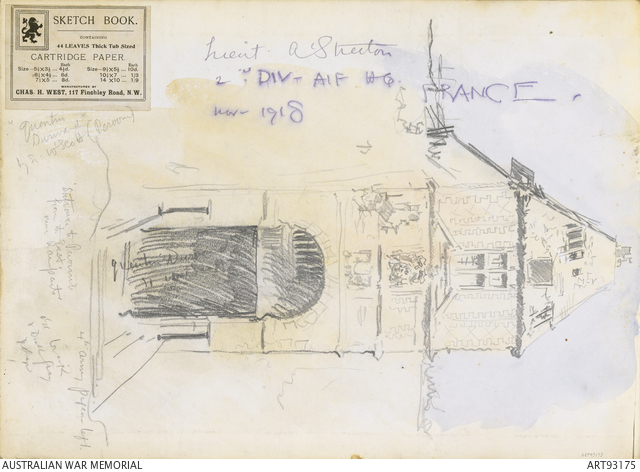 Artists sketchbook covering the campaign in the Somme Valley, November 1918. The sketchbook comprises 27 pages, including 5 blank pages, 20 sketches and two illegible partial sketches. Places depicted include Peronne, Bellicourt, Buire, Cappy and Boulogne, with various sketches of towns, cities, ammunition dumps, Bellicourt Tunnel, landscapes, damaged buildings and a sketch for an exhibition flyer. The sketchbook is bound in hard cover and covered by stained buff coloured linen. Eight pages have been excised from the front of the sketchbook, and other pages have been excised elsewhere.

The inside front cover has an image of a pigeon loft at Peronne, near the entrance to the town from the east and near the ramparts. The loft has damage to the walls and roof. It was used as a pigeon loft by the British 4th Army for communications. Drawings in the collection that were excised from this sketchbook include ART12639, ART12631 and ART12640, and probably ART12630 and ART12638. The inside back cover has a partial sketch that has been crossed out.

Purchased with the assistance of the Australian Government through the National Cultural Heritage Account, 2007