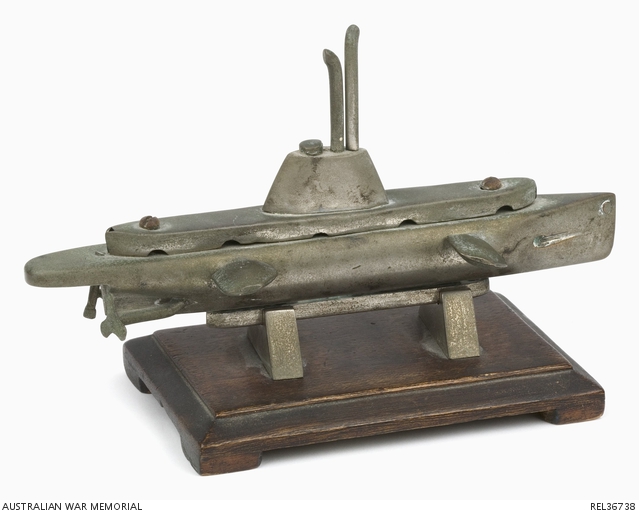 White metal model of a submarine sitting on a wooden base. The submarine's hull is made up of four pieces. The conning tower has two periscopes and the hatch cover upper most. The conning tower sits on an upper deck which has been screwed into the main hull. The hull has two forward facing torpedo tubes fashioned into it as well as two pairs of dive planes which move independently of each other. At the back of the hull are two propeller shafts, the right hand propeller is intact, the left one is missing. There is a rudder shaft between the end of the propeller shafts, but the rudder itself is missing. The underside of the submarine has been added so that the vessel can be seated onto the decorative wooden base. The wooden base is designed like a plinth. It has a small foot attached to each corner with small nails to raise the base slightly. Attached to the base by screws are the supports for the submarine. The bottom of the submarine slots into the supports for display purposes.

Associated with the service of Sergeant 8593 William Gilbert Bruce who was born in Newtown, NSW in 1885. After leaving school, he became a butcher in the Redfern area of Sydney. Bruce enlisted for service in the AIF on 13 August 1915. He was posted to 19 Army Service Corps as a butcher and promoted corporal the same day. He embarked from Australia on 30 November 1915 in HMAT Suffolk. Bruce disembarked in Alexandria in February and was promoted to sergeant on 7 March. Bruce embarked from Alexandria on 17 March, arriving in Marseilles on 23 March. Upon arrival in France, he was sent to the 2nd Field Butchery where he spent the remainder of the war. He came into contact with German prisoners of war and bought several items from them. He also gave them cigarettes and spent some of his off duty time talking with them. Bruce left France for England on 17 March 1919 where he spent two months, before embarking for Australia aboard the ship Karagola on 8 May. He disembarked in Sydney on 14 June and was discharged from the AIF on 16 August 1919.