Studio portrait of three men of the 9th Brigade. Identified on left is 2324 Private (Pte) Edgar ... 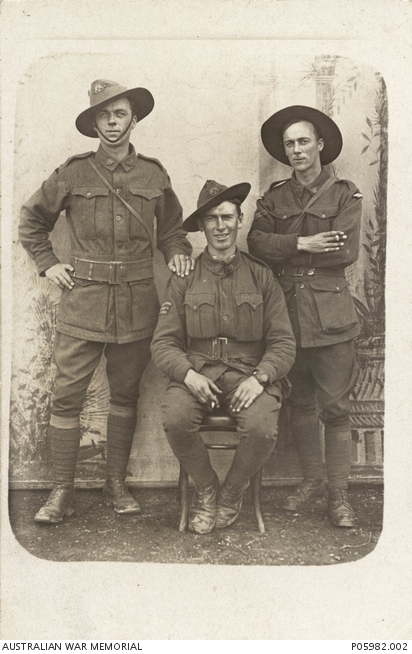 Studio portrait of three men of the 9th Brigade. Identified on left is 2324 Private (Pte) Edgar Henry Harris, 33rd Battalion, of Uralla, NSW. A grocer before enlisting in May 1916, Pte Harris left Australia for England in May 1916 and arrived in France for service on the Western Front in April 1917. Although wounded in the left hand by a German hand grenade during a patrol of No Man's Land in the area of Aubigny, France, on 7 August 1918, Pte Harris survived the war, and returned to Australia in 1919. The other two men are identified only as an unknown Sergeant of the 33rd Battalion (seated) and an unknown Corporal of the 36th Battalion (right). On the verso of the card is a letter written by Pte Harris' older brother, 436 Pte Oliver Arnold (Ollie) Harris dated 11 October 1917: "Dear Mother, I was with Edgar yesterday, and as he was going up to the line he asked me to send this card along for him, he is in the best of health, but is very busy. I am o.k myself. We are having some very wet, cold weather here just now, but I hope it clears off. Well I suppose you will have xmas with you by the time you receive [sic] this, so I wish you the compliments of the season. Best love to all at home, your loving son Ollie xx". For a photograph of Pte Oliver Harris, see P05982.002.