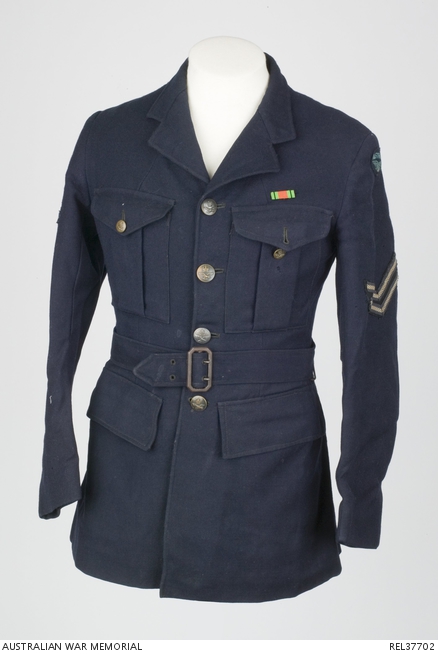 Airman's RAAF blue wool serge winter service dress tunic with self fabric belt with blackened metal two tine buckle. The tunic has a pair of pleated breast pockets with pointed flaps, welt pockets over each hip concealed by rectangular flaps, woven corporal's rank chevrons on each upper sleeve and light blue embroidered 'AUSTRALIA' titles above the RAAF eagle at the head of each sleeve. The tunic is fastened down the front with four blackened brass RAAF king's crown and eagle buttons, made by Stokes & Son, Melbourne. Two smaller buttons of the same pattern fasten the breast pockets. A medal ribbon for the Defence Medal is sewn above the left breast pocket. The tunic has a centre back vent extending from the waist to the bottom of the skirt. A brass belt hook is set into the left side seam. The body is lined with black cotton and bears a pleated self fabric pocket at the lower right front to carry a field dressing. The sleeves are lined with grey cotton. There are embroidered laundry marks inside the back neck. A printed cotton manufacturer's label for Mitchell Walker & Co is sewn to the inside right front.

Tunic worn by 4742 Corporal John Mitchell, born Millicent, South Australia on 18 October 1919. He had worked as a farm hand, mechanic and wool classer, and served in the militia with 3 Division Signals before enlisted in the Royal Australian Air Force (RAAF) on 11 September 1939 at Laverton, Victoria. Because of his previous signals experience in the army, Mitchell was initially assigned to No 1 Company Albert Park Signals in Melbourne. Early in 1940 he volunteered for ground crew service and left Melbourne for service in Britain aboard RMS Orontes, arriving in London on 16 April 1940. Mitchell was posted to 10 Squadron RAAF for the rest of the war, working as a flight mechanic, then as a Fitter 2E, on the squadron's Short Sunderland flying boats. The squadron operated out of RAF Mount Batten, near Plymouth, between April 1940 and June 1941, and from Pembroke Dock in Wales between June 1941 and January 1942. The unit then returned to Mount Batten until it was disbanded in October 1945. Mitchell married at the end of 1941 and a year later was given permission to live off base in Plymouth with his wife, Lillian. He returned to Melbourne in October 1945 and was discharged at the beginning of 1946.