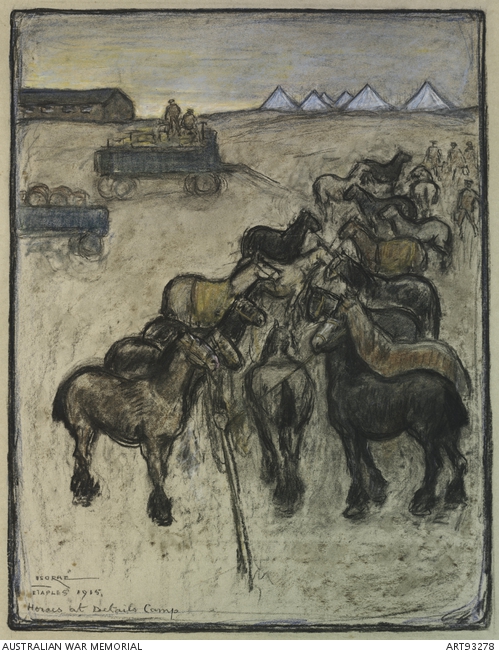 Executed in pastel, this work depicts a number of horses tied up, with wagons full of soldiers and supplies, and tents in the background. Details camps accommodate personnel in transit; in this case the troops would be arriving in or departing Etaples via the port. The horses are emphasised in heavy black outline drawn in Rae's typically spontaneous and agile style. She seems delighted by the repetitive and rythmical nature of the horses tied up in a row. She often portrayed her scenes from afar, as she has done with this work, using a panoramic viewpoint and higher than usual elevation. This work also reflects the influence of the French Post-impressionists in her work.
Iso Rae was one of only two Australian women artists who were able to depict the First World War at close quarters. From 1915 - 1919, she produced around 200 pastel drawings while working for the Voluntary Aid Detachment (VAD) of the British Red Cross, as a VAD, in one of the YMCA huts at Etaples camp.
Born in Melbourne, Rae trained at the National Gallery School, where her fellow students included Tom Roberts, Frederick McCubbin and John Longstaff. She moved to Paris in 1887 with her family and in 1890 joined the artists' colony at Etaples, while continuing to exhibit her paintings in the Paris salons. When war broke out, the Rae family were the only foreigners to remain in the town.
Rae's drawings offer an insight into the complex support system that operated behind the lines, depicting the life of the camp in all its great variety: the different nationalities, Australians lounging in the background while German prisoners work, romance in the streets, the neatly ordered buildings of the hospital and tent lines, soldiers playing football and queuing to see movies. She saw events from a different angle than the men, her scenes were often incidental to the activities, yet they were intrinsically bound up in them.
Strategically located near the coast of Northern France, Etaples was the scene of immense concentrations of Commonwealth reinforcement camps and hospitals. It was remote from attack, except from aircraft, and accessible by railway from both the northern and southern battlefields. Etaples camp served as a training and retraining ground for forces about to enter battle; a depot for supplies; a detention centre for prisoners, both Allied and enemy; and administered nearly twenty general hospitals that served the wounded from the Somme battles.
By 1917, there were 100,000 troops camped among the sand dunes. The hospitals included eleven general, one stationary, four Red Cross Hospitals and a convalescent depot, and were able to deal with 22,000 wounded and sick at any one time. The town's medical prominence did not escape the attention of the German high command, which staged a number of air raids on the town. Four such attacks in May 1918 were launched using incendiary bombs directed against various hospital sites, resulting in many casualties.