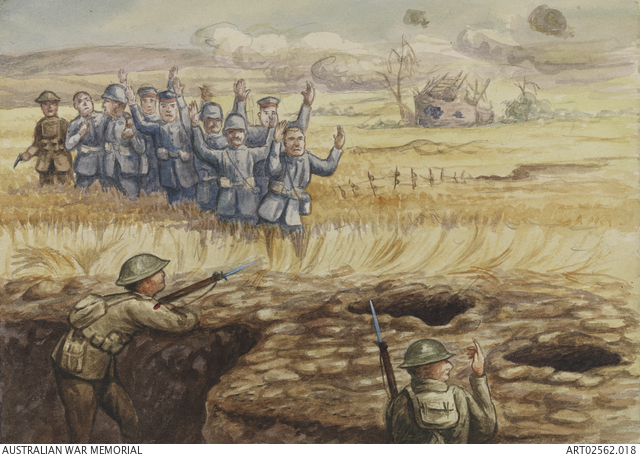 Depicts eight German prisoners, their hands up in surrender, being lead across a corn field by a member of the 6th Battalion. Two other members of the Battalion poke out of the trench in the foreground, two bomb craters nearby suggest they were in the line of fire. One leans over the edge with his rifle pointed at the approaching prisoners (the 6th Bn patch visible on his right arm); while the other looks away, his rifle at ease as he beckons the rest of the battalion. In the background is a bomb damaged farmhouse and plumes of smoke still lingering above from the recent fighting. The artist recounts the events depicted in this illustration: "On the night of 9th July, 1918, 'C' Company, 6th Battalion, in conjunction with the flanking Company of the 4th Battalion, carried out a small attack on the outskirts of MERRIS; a salient in our line was 'squeezed out', and the line pushed forward over a slight crest. We thus denied the Boche observation of our rear, whilst we obtained command of all his country right back to the Outtersteene Ridge. Next day a very daring little enterprise was carried out by the N.C.Os in 'C' Company., Sergeant Lockhart / and Lance Corporal ('Blue') Farrell. Moving out at about 3pm. from their newly established post, a stone's throw from the mass of crumbled wicks - all that remains of the once smiling village of Merris - they pushed out through the tall standing crops of corn, looking for signs of the enemy. After some time they located a post, and in Red-Indian style stalked it, rushed it, over powered the N.C.O. who rushed to his M.G., and brought in all the occupants of the post - 8 startled men - with their two machine guns. This episode illustrates the spirit of the Battalion at this time - all were out for adventure, and all day long platoons had men out in search of unwary Boche. In this way a few more prisoners were brought in, besides a number of [machine guns], whose owners considered discretion to be the better part of valour."

Outtersteen is a village in northern France, about 8 km from the Belgian border. It is significant because the 1st, 2nd and 53rd Australian Clearing Stations were established there with the Third Battle of Ypres (Passchendaele) in August 1917, the first two of these remaining until March 1918.