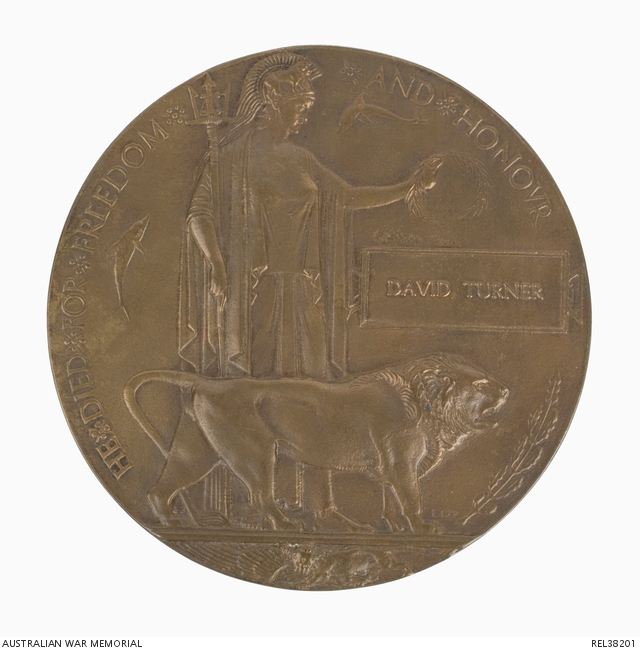 Bronze Next Of Kin Plaque depicting Britannia and the British lion with oak leaves, a laurel wreath and dolphins. Around the edge are the words 'HE.DIED.FOR.FREEDOM.AND.HONOUR'. In the exergue a small figure of a lion crushes the German Imperial eagle. The name of the subject of the plaque 'DAVID TURNER' appears in a raised rectangle beneath Britannia's left arm. The Woolwich Aarsenal mark is stamped into the reverse.

David L Turner was born in Britain and served in the London Metropolitan Police Force, in V Division (Wandsworth). Sometime before 1914 Turner emigrated to Canada. It is not known whether he had met and married his Australian born wife, Annie, before he emigrated, or whether they were married in Canada. Turner enlisted in the Royal Naval Canadian Volunteer Reserve (RNCVR) on the outbreak of the First World War and was assigned the service number VR/1138, attaining the rank of Petty Officer. He served in HMCS Shearwater, a sloop transferred from the Royal Navy. Shearwater's guns were removed at the beginning of the war, when she was located in British Columbia, and her crew were sent to man HMCS Niobe at Halifax. Shearwater was subsequently reconfigured as a submarine tender and largely remanned by her original crew who transferred to the Canadian west coast once more. Shearwater escorted two submarines, HMCS CC-1 and CC-2, in 1917, down the west coast of America, through the Panama Canal to Halifax. Turner, however, died before the start of the voyage, while Shearwater was still in British Columbia. He is buried at Vancouver (Mountain View) Cemetery. His widow returned to Sydney to live with her family, together with her infant daughter. The Canadian Government forwarded her husband's plaque to her there in 1923.