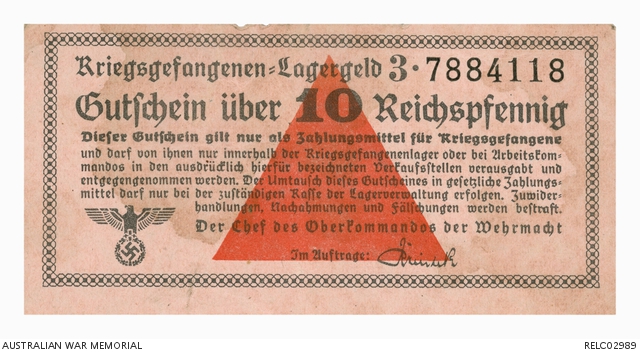 Six German POW camp vouchers printed on one side on pink paper. Each voucher has an ornamental printed frame and a red triangle in the centre. At the top of the voucher is printed: 'Kriegsgefangenen Lagergeld', followed by a number, indicating the series the voucher came from, followed by a seven digit serial number. Beneath this is printed 'Gutfchein uber 10 Reichspfennig'. Under which is printed issuer information, with an image of the German eagle. The series numbers and serials numbers of each voucher as follows: Series 2, number 0029966; Series 2, number 0214203; Series 3, number 7884118; Series 3, number 78886062, Series 6, number 0357024 and Series 10, number 1191137.

Associated with WX3383 Lieutenant John Robert 'Jack' Millet, who was born on 19 February 1912, the son of Richard and Amelia Millett. Before the Second World War he worked in a variety of jobs, including assembling cars for General Motors at Cottesloe, until the Great Depression caused the factory to close, and later as a miner and a panel beater. In 1937 he joined the 11th Battalion (City of Perth Regiment), a militia unit. The following year he married Irene 'Rene' Cary. A son, Bob, was born before Millet enlisted in the Second AIF on 17 July 1940, when he was allocated to the 2/11th Battalion. Millet joined his unit in North Africa and went into action for the first time at Bardia on 5 January 1941. As part of the Allied advance into Italian-occupied Libya, 2/11 Battalion subsequently fought at Tobruk on 21-22 January, and to secure Derna airfield on 25 January. The battalion was advancing to the south of Benghazi when the Italians surrendered on 7 February. At Bardia and Tobruk, Millett was responsible for organising the movement of Italian prisoners behind the lines. Together with his battalion and other 6 Division units, Millett was sent to Greece, arriving near Athens around 13 April 1941. They travelled to Larissa by cattle truck, and then by truck to defensive positions at Kalabaka. There they held the position while troops evacuated the area, destroying tunnels and bridges in the area behind them. One was done too soon and the troops had to be withdrawn over pontoons. The battalion fell back to Bayliss before advancing 15 miles to hold a defensive position while more troops were withdrawn, before evacuating Greece themselves by sea on 25 April 1941. The battalion landed on Crete the next day and were sent, with 2/1 Battalion to defend Retimo airfield on the north of the island. German paratroopers landed on Crete on 20 May. Allied troops began leaving Crete on 28 May, but not all troops could be evacuated. Retimo airfield was held for ten days before the 2/11th and 2/1st Battalions were forced to surrender on 30 May. Millett was taken prisoner by the Germans and was transported in a Junkers 52 aircraft to Athens, and then moved by train and on foot through Greece to Salonika, where he spent three weeks. Millett organised an escape attempt with another prisoner, Fred Roberts but they decided against the attempt when some Cypriots attacking the wire of their compound were shot dead. The prisoners were then taken through Austria to the camp at Oflag XC at Lubeck. From here Millett was eventually transferred to Oflag VIB at Warburg. At Warberg he was caught trying to dig a tunnel out of the camp from his hut with another prisoner. He was transferred to Oflag VIIB at Eichstatt in Bavaria. Here he began producing maps for escaping prisoners. Millet also took part in digging the tunnel that was used in the first mass escape of prisoners during the Second World War. On 3 June 1943 65 men escaped through the tunnel, including Millett, who was on the run for five days before he was recaptured. In response to this escape attempt he was transferred to Oflag IVC at Colditz Castle. This was the camp for the 'incorrigibles', those who had continually attempted escape, and for the 'Prominente' (people with prominent connections who could be used as hostages). Colditz Castle, situated on the side of a cliff and surrounded by a dry moat, was thought to be escape proof. However, incarcerating so many dedicated escapers together led to a number of further escape attempts, some of them successful. In response to these German guards eventually outnumbered prisoners at the castle. At Colditz Millett continued his escape committee career, becoming the map maker. Oflag IVC was liberated in April 1945 and Millett eventually made his way home. After the war Jack and Rene had another son, Barry. Jack worked in a number of metal trades. He died on 1 December 1999, aged 87.