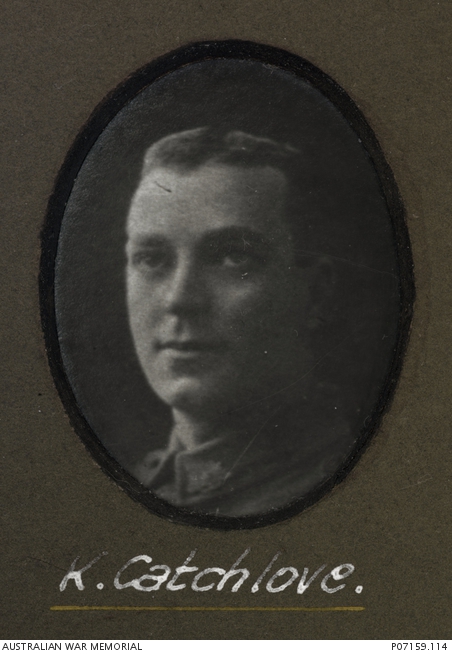 Studio portrait of 314 Corporal Keith Catchlove, 3rd Light Horse Regiment who was a 21 year old clerk from Mitcham, South Australia when he enlisted on 19 August 1914. He embarked for overseas from Adelaide on 22 October 1914 aboard HMAT Port Lincoln. While serving at Gallipoli, he became ill, was medically evacuated to England and in May 1916 returned to Australia. He re-embarked for overseas as a Gunner (service number 30817) with the 5th Field Artillery Brigade from Melbourne on 23 November 1916 aboard HMAT Hororata. While serving in Belgium, he was gassed and medically evacuated to England. He recovered, returned to see action in France and arrived back in Australia with the rank of Sergeant on 26 June 1919. He also served in the Second World War until 24 July 1942 with the 9th Battalion Volunteer Defence Corps. One of 131 photographs displayed on an honour board showing members of the Adelaide Rowing Club who enlisted for active service in the First World War. The original is held by the Adelaide Rowing Club who kindly loaned the board to the Australian War Memorial for copying.