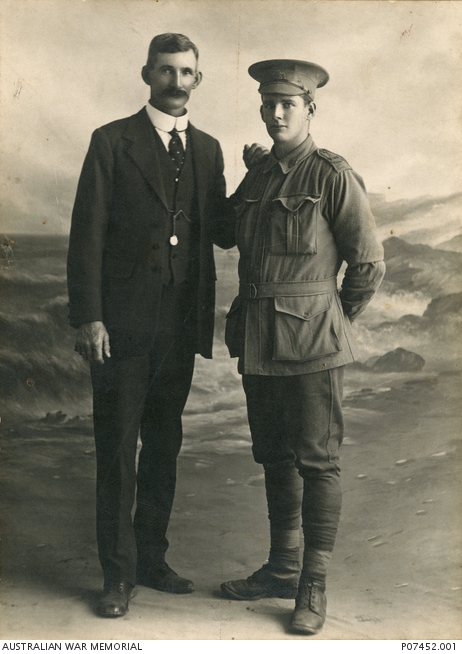 Studio portrait of 550 Private (Pte) Theodore Carlisle McLean, 11th Machine Gun Company, of Murwillumbah, NSW, posing with his father Lachlan McLean. A farmer before enlisting in August 1916, Pte McLean left Australia for England with the 8th Reinforcements in February 1917 and arrived in France for service on the Western Front in June 1917. Accordong to the 11th Machine Gun Company Unit War Diary, Pte McLean was one of eleven men killed on the night of 29 September 1917 whilst in camp south of Poperinge, when an "enemy aeroplane dropped two bombs close to the tents in which the company was camped". According to Pte McLean's Roll of Honour circular filled out by his father "The deceased was our only son, and was anxious to enlist when war broke out, but owing to a severe illness was unable until 7th July 1916". He was aged 21 at the time of his death. Another photograph of Pte McLean is held at P06493.001.